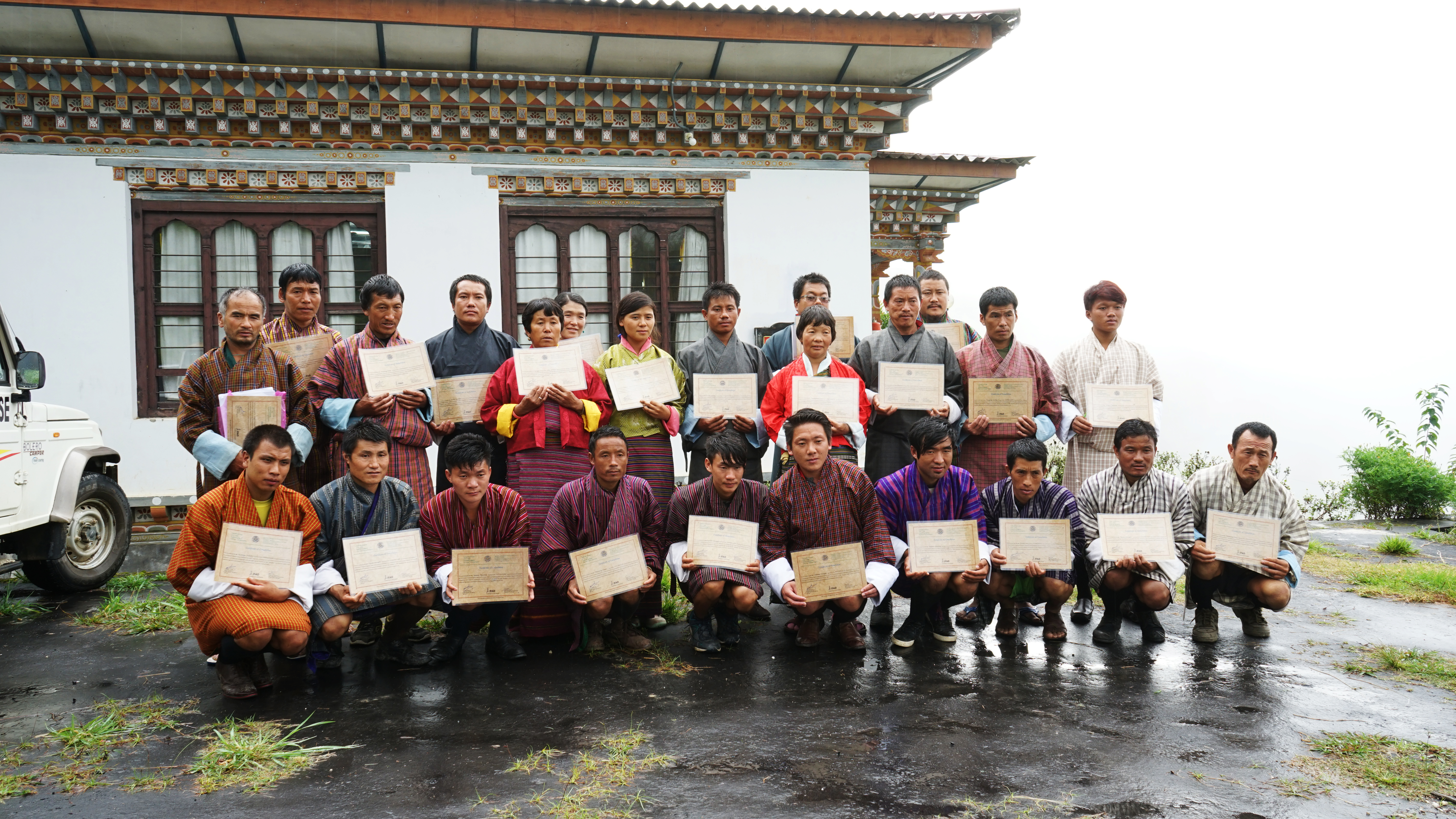 With the completion of the fourth and final course of ‘Lead Farmers module’ on Post-harvest and marketing from 26-30th, September 2017, the 24 farmers (4 female, 20 male)  from six Eastern Dzongkhags are now the formally certified as ‘Lead Farmers’ in the region.

These 24 farmers have attended the earlier three courses of ‘Lead Farmers’ module’ on awareness of the farming technology options in September 2016, crop establishment and management practices in January 2017, and crop management technologies in May, 2017.

With the certification of these 24 farmers as the ‘1st batch of Lead Farmers’ in the region under the support of CARLEP-IFAD, the respective Dzongkhag Agriculture Officers (DAOs) and the Gewog Agriculture Extension Officers (GAEOs) will deploy them to increase the agriculture outreach and extension services.

The Hon’ble Dasho Dzongda of Mongar Dzongkhag awarded the ‘Certificate of completion’ on the lead farmers’ module to each participant on 30th September, 2017. Along with the certificate, the farmers were handed over to the respective DAOs and GAEOs.

The Lead Farmers’ module is designed by Agriculture Research and Development Center (ARDC, Wengkhar). The module is spread over a year in a total of four different courses. In these four courses time, farmers were provided with various knowledge and modern skills in farming and also in record keeping. A model farm each is established in all the 24 farmers with the technical and input support from ARDC.

Going back to the farm, these farmers will not just implement whatever the skills acquired, lessons learnt, knowledge gained, and information received in their own farms but they are also entrusted with the added responsibilities to inform and disseminate the learnings to other villagers. In fact, the modality of the Lead Farmers’ is such that these trained lead farmers will lead the farmer-to-farmer extension and create a minimum of five more lead farmers in a similar manner in their community in a period of one year. This multiplication will go and by the 3rd year, it is envisaged to have 125 lead farmers created in each community in the region.

Meanwhile, the training to the 2nd batch of lead farmers’ will start from November, 2017 in a similar manner. The DAOs and GAEOs will identify and select those farmers with the potential to demonstrate and disseminate the skills and knowledge to other farmers and also who are willing to attend the training course. Preference will be given to the youth and women farmers.