A Case of Rubia Collection and Marketing in Kerong 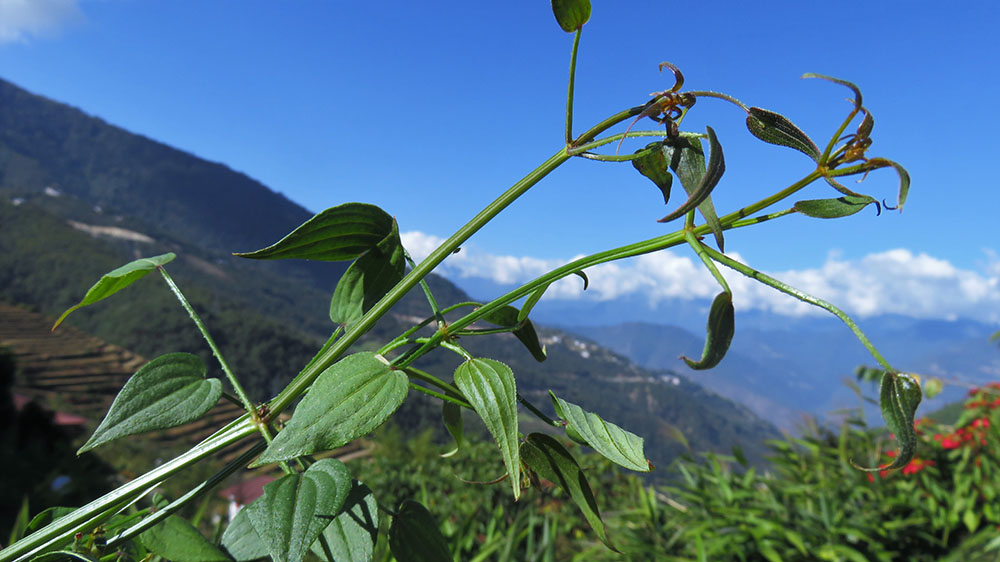 Rubia, scientifically known as Rubai Cordifolia, laniru in Tshanglakha, Tshud in Kheng and madder in Hindi is a species of flowering plant in the coffee family, Rubiaceae. It is a perennial, prickly or scabrous, climbing herbs belonging to Rubiaceae (Devi Priya M, 2014). Rubia is known for its medical properties and widely used as a blood detoxifier and coloring agent. In Bhutan, Rubia is used mostly in coloring the fabrics and wooden floors. Traditionally, it was also used in coloring the eggs to be presented in high profile gatherings. Apart from these, Rubia still is believed to have the martial benefits of curing marks and scratches from the evil spirits.

For Kerongpas; the people of Kerong village with 57 households (HHs) under Choekhorling gewog of Pemagatshel Dzongkhag, Rubia is a primary source of income. Kerongpas’ have been collecting Rubia for decades but in a small and sustainable quantity. However, in 2013, ‘Kerong Rubia Collection Group’ with 38 members was formed by the Dungkhag Forestry Unit under the support of MAGIP. Since then, mass collection of Rubia was started.

MAGIP’s intervention to Kerong was particularly on the assets required in the Rubia collection, routing through Dungkhag’s Forestry Office. Therefore, starting from the advocacy for the group mobilization till the establishment of the group and the supply of necessary equipment required for the Rubia Collection were supported by MAGIP. MAGIP has provided a weighing machine each inclusive of membership register, bylaws book and other files required to keep the group on track. In addition, the sacks and polymer bags were also provided to the collectors so that they can store the collections safely.

Rubia collection starts from October and lasts till the end of November or early December. According to some of the collectors, each member collects about 200-300 kilograms per season. On an average, a person can collect about 20 kilograms in a day. However, the amount collected is determined by the skills and the physical strengths of an individual. For the collection area, each community has a certain acres of boundary allocated upon which one cannot enter beyond the demarcation. However, by any chance, if the collector from the next community is found crossing the demarcation, a cash of Nu. 1500/- is imposed as a penalty. But so far, no major misunderstanding has happened. The Collectors says that the collection of Rubia is not very hazardous in nature. Collectors need not have to be equipped with safety materials/gears except the hand gloves as per the individual’s preferences. However, the major challenge in the collection is that of the fear from snakes, elephants and other wild inhabitants.

Rubia is domestically cultivable but so far nobody has cultivated/planted. Worst of it, nobody in Kerong has done anything for its regeneration because the plant falls under NWFP and its collection is done entirely from the wild. Rubia collectors of Kerong are conscious and concerned about the sustainability issues and the likely environmental destructions. According to the collectors, the sustainability concerns within the collectors has happened after the sensitization from the Dungkhag’s Forestry Sectors. Therefore, the collection is done in such a way that the entire roots are not uprooted or damaged. They cut and take only the matured stems from an inch above the ground surface. In the next collection season, the sprouts develop from the the roots into a matured plant. Since Rubia is a climber, collectors folds and make a bunch. In a day, they can collect about 200-300 bunches on average. 300 bunches of raw Rubia when dried weighs about 20 kilograms. Back at home, bunches are chopped and made into the pieces and dried under the sun. The collectors feel that there is no need of monitoring on sustainable collecting approaches or the intervention from the concerned sectors on sustainable collection measure because each collector is taking the individual responsibility.

Rubia marketing in Kerong is done collectively in the Group. The middle men/traders from the local community gather all the collection and do the pricing. Collectors don’t take their products individually to the market. The price of a kilogram of Rubia in 2015 was Nu.45/-. So, collectors could make an average earning of Nu.13, 500/- in a season. Collectors find that the earning from Rubia collection is reasonable. This is because they don’t have any input for the Rubia’s growth yet they can harvest. In addition, Rubia collection is not labor intensive doesn’t incur heavy labor requirement and excessive work load. Similarly, collectors needn’t have to worry about the market and the transportation charges. The traders collect right from their door steps.

For now, only the stem is used and marketed. But the leaves remain as residue. However, it is the leaf that has more coloring properties. According to the collectors, the leaves are very light and thus hard to get enough quantity. So, this is opening an opportunity in powdering the leaves and setting different price tag to it. Other possibilities such as value adding like grinding, cutting into different shapes and sizes can also be explored. Moreover, Rubia is available in most of the places in the Eastern region of the country. However, the collection is not done widely, particularly because of its market constraint as the bordering towns in India are the only existing markets. Therefore, if the domestic market could be opened, the number of Rubia collectors would increase, which would definitely have a positive impact towards increasing the living standard of people and also curb the unemployment rate to certain extent.