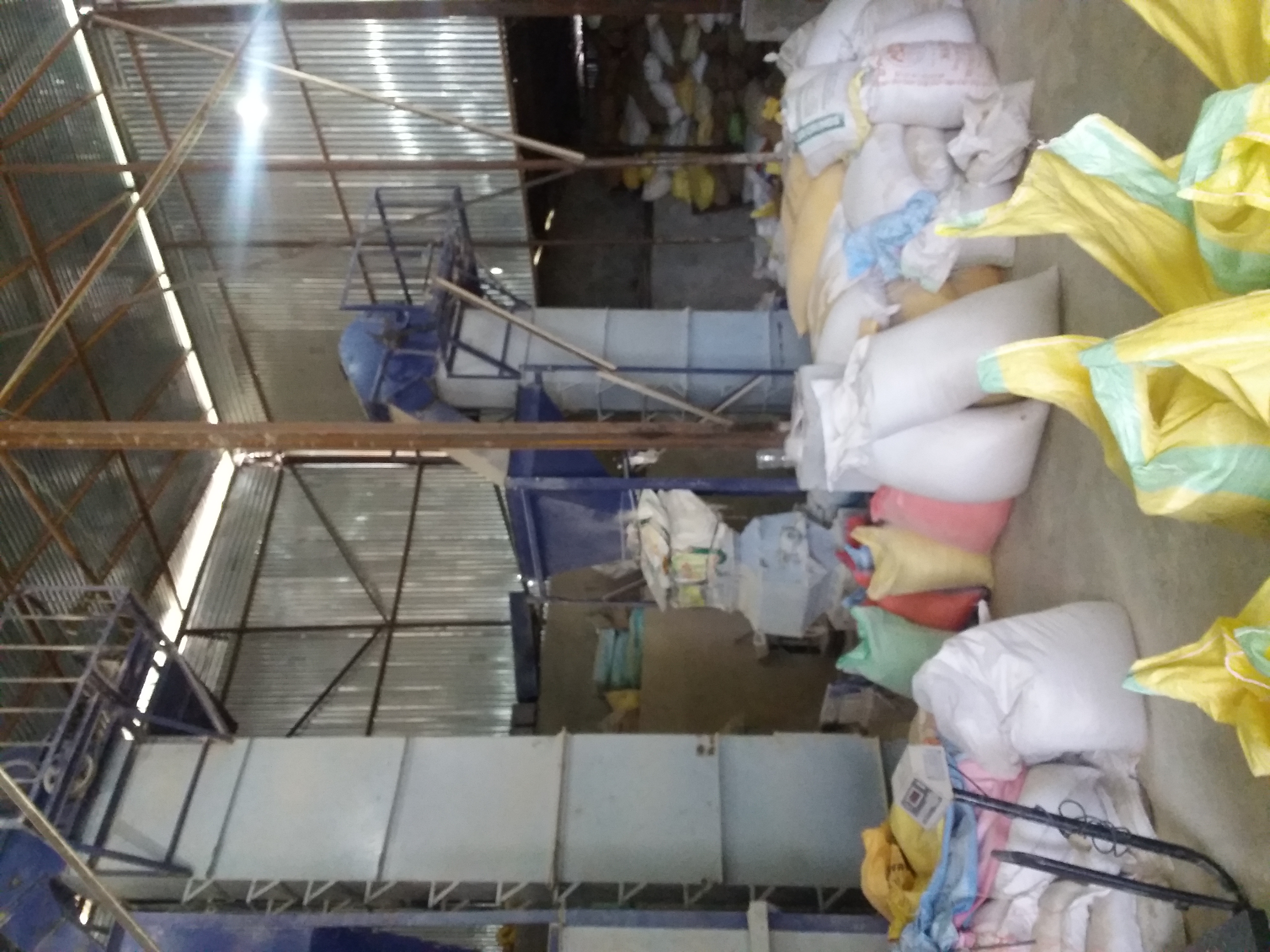 Pema Feed Mill which is been developed as a PPP (Public Private Partnership) model between MAGIP and the Promoter Mr. Pema Dorji became operational in August 2015. While MAGIP provided financial support amounting to Nu. 2.6 million, that covered the costs of a full set of Medium Scale Feed Mill with the capacity of 32 MT per day with horizontal feeding system and for laying mill house foundation up to the plinth level, the promoter has contributed one Acre land, mill house, feed store, approach road to mill house, transportation and three regular employees, with the total worth of Nu. 6.530 million.

The feed mill is located at Namla under Kanglung Geog which is located about 20 km away from Trashigang town towards Samdrup Jongkhar.

The increasing numbers of livestock farms (Piggery, poultry, and dairy) in the Eastern Dzongkhags has increased the demand for the concentrated feeds. The commercial Karma feed is often inadequate and expensive owing to long distance transportation which has to come all the way from Phuntsholing. On the other hand, the local farmers produce surplus cereal grains and oil seeds which they find it difficult to market and face huge post-harvest loses. In fact, these excess grains which are left unprocessed and underutilized can easily go as raw materials into the feed mill, if there exist such plant in the region.

Following the above views, Pema Feed Mill in Namla under Kanglung geog of Trashigang Dzongkhag was found feasible. Therefore, with the following long term and short term objectives, the mill was established.

Long-term: The Feed Mill shall create good market opportunities for the farmers to produce more cereal and oil crops and dispose their surplus besides manufacturing quality feeds, and concentrates for the livestock. The company would also procure and sell some important feed ingredients to the farmers who require them, a clear win-win deal.

Short Term: The Feed Mill shall fulfill the following requirements:

Currently, Pema Feed Mill processes a minimum of 4 tons of feed per day. However, the production is determined by the amount of demand they receives from the buyers. In a month, the Feed Mill processes an average of 800-850 bags of 50 Kilogram feed. In the December month, 2016, the Feed Mill has processed 891 bags inclusive of 609 bags for poultry layers, 30 bags for the growers, 10 bags for the starters and 242 for dairy. According to the Feed Mill manager Mr. Sangay Dhendup, the demand for the feed has increased over the years, although they don’t have any regular or the definite customers. In fact, their customers are spread out all over the Eastern region. The Feed Mill outlet located in Trashigang town used to sell only about 70 bags a month prior to April 2016 but now the same outlet deports about 170-178 bags a month. All the payments are made on cash, the Feed Mill don’t entertain the credit facilities to avoid the associated inconveniences.

The Feed Mill supplies the feeds on ‘pre-order-basis’, where the buyers place the order either through phone calls or personal visit. Since there is no much formalities required in availing of the feeds, the demands are supplied on an immediate and need basis. There is no fixed feed amounts for the customers to place their order. They can place the order in any range as per their preferences. As of January 2016, the highest order they received is 3826 bags of layer feeds by one of the customer from Lhuentse.

The feed mill remains open for six days in a week from 8:00 am in the morning till 5:00 pm in the evening, except on Sundays and National Holidays. At present, it is operated by three permanent Bhutanese employees.

During the off seasons or in the case of not being able to meet the raw materials from the local community, the Feed Mill manages it from Indian Market.

To monitor the feed quality, the Feed Mill receives the concerned officials from BAFRA every month who then does the sample testing to ensure that all feed ingredients are in appropriate ratios. Moreover, the officials from Nutrition and Animal Health Sectors of RLDC (Regional Livestock Development Centre, Kanglung) also makes a frequent visits to the feed mill to update on the feed quality.

Despite of technical back-up and quality checks by the line agencies,the feed mill receives complaints from the buyers citing decline in egg and milk production. As Pema Feed Mill produces mashed form of feed it is likely that intake loses in poultry are comparably higher than pelleted feed produced by Karma Feed Mill. “Low quality feed is mainly attributed to poor quality of raw materials they receive from the farmers. Quite often, the factory receives maize infested with fungus.” Said the Manager.

Some of the reasons behind producing poor quality feed by the factory are; non availability of subject matter expert in feed formulation, inferior quality raw materials, non availability of core concentrate (premix), and interest of the proprietor. The proprietor has shifted his interest in producing feed in the east to producing feed in the south as he has bought feed mill at Gelephu. As per the proprietor, the demand and scope of feed business is manifold in the south compared to east.

The Feed Mill has large exterior and open space. The surroundings are tidy and at a sufficient distance from the road point. Internally, the Feed Mill has the CCTV set-up, ensuring the track-down of any threats related to theft, robbery and other mischievous actions.

The employees are provided with google glass, mouth cover and a pair of gum boot a year. However, the employees has no uniform or dress code and other safety wears to avoid the noises from the machines.

Economic Aspects: economically, the Feed Mill is viable. It is a successful/profitable venture to the promoter, where-in, as a PPP initiative, half of the initial investment is borne by MAGIP. The profit margin is not known but it is certain that profitable because the production trend is on rise. The market is spread all over the six Eastern regions.

Environment Aspects; environmentally, the Feed Mill is sound. It is not producing any un-degradable and hazardous waste, neither the air pollution. The nearby water is not contaminated because the feed mill doesn’t use any water for its operation. The only waste generated in the torn-out sacks, some paper boxes and the molasses tins which are usually dealt to the scrap dealers. Due to its idle location, communities nearby has also not felt any sort of sound or noise pollution. The surroundings are maintained with free of garbage.

Social Aspects: socially, Pema Feed Mill is acceptable. It has not only improved the accessibility to the concentrated feeds, Pema Feed Mill has made the concentrated feeds locally available. In the current trend, many buyers are opting for Karma Feed because of its superior quality but Pema feed mill is a reliable feed source because Karma Feed has to get transported all the way from Phuntsholing.

The society has greatly minimized the post-harvest losses. Pema Feed Mill has opened the market opportunity for the cereals and oil seeds like maize, soya and mustard.

SWOT analysis is a study tool used to identify the Strengths, Weaknesses, Opportunities and Threats to any businesses. Thus, following are the SWOT analysis of Pema Feed Mill:

Following are some of the recommendations proposed:

Overall, the Pema Feed Mill which has started as a PPP initiative between the Promoter and MAGIP was found to be economically viable, socially acceptable and environmentally feasible. It has not only benefited the promoter but also the surrounding communities mainly by making the concentrated feed locally available and opening the market for the domestic produces (maize, soya and mustard), thereby reducing the post-harvest losses.

However, Pema Feed Mill has to consistently maintain the feed quality by deploying at least one technical employee in feed formulation. Given a better feed quality, Pema feed mill has the potential to meet the feed needs and cover all the six Eastern Dzongkhags.