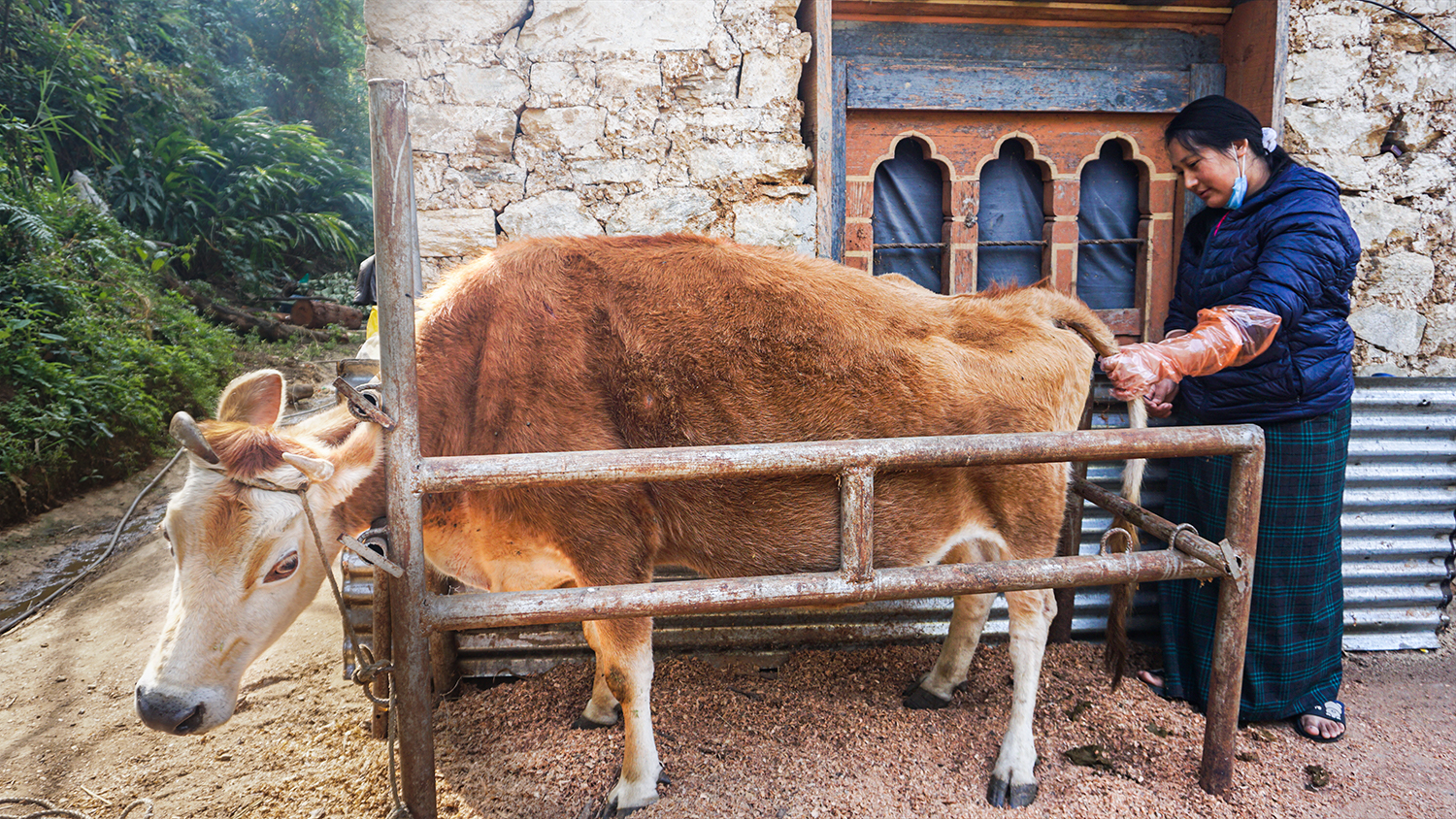 Dairy has always been one of the important livelihoods for farmers in Bhutan. As per the livestock statistics of 2019, Indigenous cattle make up 65% of the total cattle population in Bhutan.

There has been a steady increase in the population of crossbred cattle in Bhutan, with various breed enhancement interventions such as supplying community breeding bulls, outsourcing hybrid cattle, and introducing Artificial Insemination technology.

Artificial insemination (AI) is considered, one of the most important reproductive technology, for improving the genetic potential of animals for increasing productivity. The technology was first adopted in 1987 in Bhutan.

However, the AI service was inaccessible to most of the dairy farmers from remote communities, due to rough geographical terrain, lack of adequate AI technicians, and multi-tasking of the Livestock extension officials.

The Department of Livestock initiated the Community Artificial Insemination Technician (CAIT) program in 2010, with the pilot training of the first batch.

Understanding the importance of CAIT in filling the gap of technical human resources in the field for dairy breed enhancement, CARLEP adopted the CAIT program in 2016. Since then, the Regional Livestock Development Centre (RLDC), Kanglung had trained 36 people from six eastern Dzongkhag, with fund support from CARLEP.

Tashi, 22, a young woman from Thridangbi under Saling gewog, Mongar is the first woman to take up the role of  CAIT in eastern Bhutan under CARLEP.

Tashi could not continue her studies after 7th grade and spent most of her time helping her parents with agribusiness. Most of the time, she used to help her mother in making banana chips and beaten maize.

Aside from homemade banana chips making, she also helped her parents in managing a dairy farm.

“Dairy provides us good income.  We have around 1 local cow and 8 jersey-cross. We used to face difficulties in breeding our cows as we don’t have a breeding bull.  When I heard about the CAIT program in other Dzongkhags, I approached our gewog livestock supervisor and requested for the same opportunities” says Tashi.

At the age of 19, Tashi became a Community Artificial Insemination Technician. She completed Community AI Technician training in 2019 through the Regional livestock development center Kanglung.

Tashi was the only female participant when she attended the AI training.

“When I reached the center, I was taken aback as I was the only woman participant in the training. I felt shy at first, over a course of a time I overcame my low self-esteem because the trainers and other participants were friendly and helpful”, Tashi says.

Despite being the first and only woman during the training, she completed the training successfully. She feels the training was very educative but also intense as the course was done with no prior experience in AI. She added that one does not need to have all the skills to start something, one should have a willingness to learn and explore.

After completing the AI training, Tashi has proactively delivered  AI service in her gewog and makes an earning of Nu. 3500 a month on average. As more farmers are coming forward to avail AI services, she aspires to expand her reach to more villages.

“After the training, I have delivered the AI services to the dairy farmers from the village, i.e., Thridangbee, Kalapang, and Saling. Within my first year as a CAIT, I have inseminated 46 cows, out of which 10 have given birth. The gender ratio of the AI offspring is fairly balanced”, says Tashi

Today, Tashi is one of the successful community AI Technicians despite the challenges she faced as a woman. She has clearly demonstrated that women can be as effective and efficient as men in delivering AI services.

“I can perform the duty of CAIT effectively. At first, I thought that CAIT is a men’s job only. I was wrong to think that way. If men can do this, so can we. It just takes a willingness to learn and practice” she adds.

#To get an insight on r s in eastern Bhutan and a woman taking up CAIT through the story of Tashi Dema, the first female CAIT trained under CARLEP, from Thridangbi under Saling gewog in Mongar.