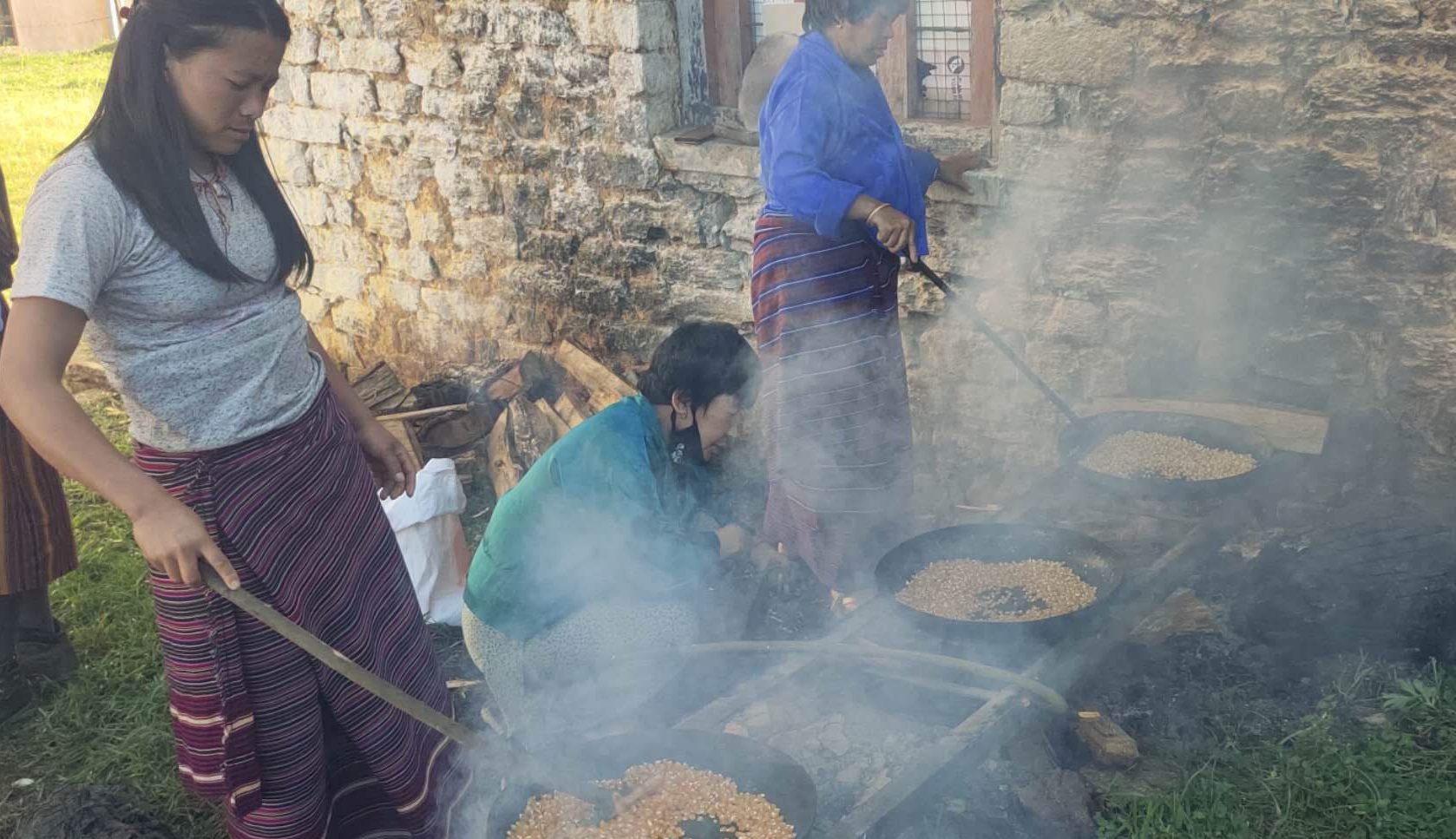 A week-long training on Tengma (beaten corn) processing, one of the most popular processed maize products of Bhutan came to an end today at Trashiyangtse Dzongkhag.

With the introduction of an improved variety of maize, the farmers have seen an increase in maize production. Most of the maize production in eastern Bhutan is attributed to household food security while some are fed to the livestock during lean seasons.

Aside from dairy products and vegetable sales, the farmers of the east have made good returns from the sale of Tengma through local processing method. Why needs an intervention?

A special case: a packet of tengma processed and sold by the Talop farmers in Punakha Dzongkhag fetches Nu.500 per Kg at a bare minimum and the tengma from the east fetches Nu.150-250 per Kg to the utmost. Why the price difference?

The difference in the price of the tengma has to do with the color, taste and texture which are influenced by the harvesting stage of maize and processing methods. Talop farmers harvest the maize at milk stage and has unique processing methods, attributing to the superior quality and taste. As Trashiyangtse Dzongkhag felt the need to train farmers on the better processing and value addition techniques, the Dzongkhag Agriculture Sector facilitated the tengma training to 10 farmers at Talo, Punakha in the FY2016-2017, with fund support from CARLEP-IFAD.

Mr. Kuenzang, 55, from Trashiyangtse is one of the farmers who received training on tengma processing a few years back. Since the training, he has been applying the knowledge and skills acquired from the training into producing quality tengma and has sold tons of tengma at Nu.350-400 per Kg while other farmers would earn around Nu.150-250 per Kg. Kuenzang has become an exemplary farmer and has created a positive ripple effect in the community. Aside from his community, Kuenzang is open to sharing his knowledge and skills with other farmers regardless of the regions and Dzongkhags.

Kuenzang conducted a week-long farmers’ training on Tengma Processing, facilitated by Trashiyangtse Dzongkhag Agriculture Sector as a resource person. A total of five female and two male farmers participants from Chali, Drametse, Balam and Sherimuhung under Mongar Dzongkhag attended the training. The training was conducted with fund support from CARLEP-IFAD aimed at equipping farmers with better processing techniques and increase the income of smallholder farmers through the sale of value-added products such as Tengma.

After the training, the farmers will go back to their respective village and adopt new tengma processing techniques and produce better quality tengma, and extend the training to other interested farmers in their community.

The training has been cautiously conducted strictly adhering to the COVID 19 measures and protocols to prevent the spread of the disease.