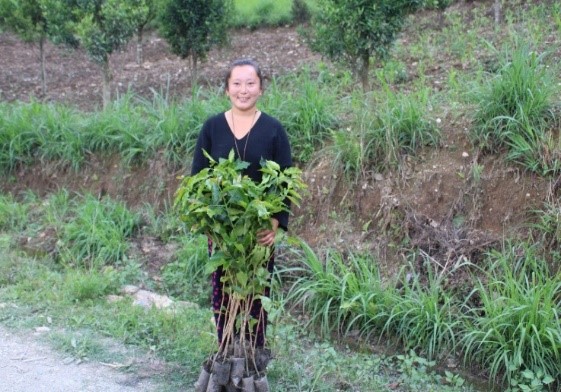 Majority of youths do not consider agriculture as a potential career due to a number of factors, including a labor shortage and a lack of training, resources, and knowledge. To tackle these issues, CARLEP provides financial assistance, and supports training and innovation such as lead farmers training, farmer-to-farmer extension program, automated irrigation systems, climate resilient farming that strongly promotes youth and women participation to make agriculture more attractive to youths. Karma Choki’s story, a 29-year-old youth, is a classic case of how financial and technical assistance are driving youths into agriculture.

After spending most of her childhood and adolescence in urban centers, Karma decided to return to her parents’ village in Khoyar in the Gomdar gewog in Samdrup Jongkhar – an uncommon situation in a country where youth often leave their villages. It was in 2015 when Karma visited her village for the first time after completing her schooling. During her visit, she learned that she had not been qualified for any government scholarships to continue her education. Instead of returning to urban centers to look for job opportunities, as many people usually do, Karma decided to stay in her village and start a new venture there. According to Karma, her decision was motivated by her passion of gardening and the appeal of village life. She therefore started her farming endeavor.

Karma had to revive the fields her parents had left behind in order for her to farm, which was a tougher task than she had initially anticipated.

“When I first returned, I could not even tell apart the farmlands from the natural forest covers”, Karma recalls.

However, with the help of her family and villagers, she was able to retrieve a small portion of fallow land to grow vegetables for her own consumption.

Karma initially relied on guidance from other farmers because she had little to no expertise with farming. Karma searched the internet to explore for ways to increase the productivity of her farm after experiencing a couple of seasons with very minimal profit from it.

On her quest to learn about better agricultural practices, she came across lead farmer in her village who shared his experience from the training. Later she participated and received training in basic organic practices through the farmer-to-farmer extension program funded by CARLEP. She also received training in composting farmyard manure.

Mr. Cheku, the Program Director of SJI, initially thought that she would not stay in the village for very long, much like many other youths. However, Karma proved that she would be a significant asset in enhancing the agriculture sector in her community with her perseverance and enthusiasm during the training course.

“Karma is one of the few youths who has voluntarily stepped forward to take up farming. She has shown interest and determination, and we are committed to helping and providing our help as required”, Cheku says.

Karma participated and became lead farmer in 2020. She was able to expand the area under cultivation and develop her farm into a model farm using the skills and knowledge she learned throughout the training and the input supports provided by CARLEP. In addition to serving as the lead farmer, Karma engages in organic farming, which involves the preparation and application of compost, liquid organic fertilizer, and biopesticides. Additionally, she promotes organic farming and trains other farmers on preparation of their own organic farm inputs for increased output.

Karma has gained more self-assurance as a farmer as a result of the training, but more importantly, she has made new friends who share her enthusiasm for farming. She thinks that other lead farmers have been a tremendous help in her agricultural advancement and she will continue to seek out and share ideas and concerns to address in order to come up with innovative solutions.

Today, Karma stands proudly on her feet and asserts that farming is a lucrative enterprise that anybody, including youth, can choose to pursue in order to enhance their living standards.

As Bhutan’s agricultural sector suffers from various consequences of the ever-aging rural population, youth with a passion for farming who return to their village, like Karma Choki, offer a light of hope for the future of the country’s agricultural sector. With the assistance of ARDC Wengkhar and funding from CARLEP, SJI believes that by supporting youth like her, especially women, it will foster the development of prosperous, resilient, and self-sufficient communities that have the courage, initiative, and wisdom to take charge of their own future, as well as achieve food self-sufficiency and empower youth.

CARLEP is collaboratively working with implementing partners to empower youth and women in agriculture. This is progress toward achieving the goals of Sustainable Development; no poverty, zero hunger, gender equality, decent work and economic growth.