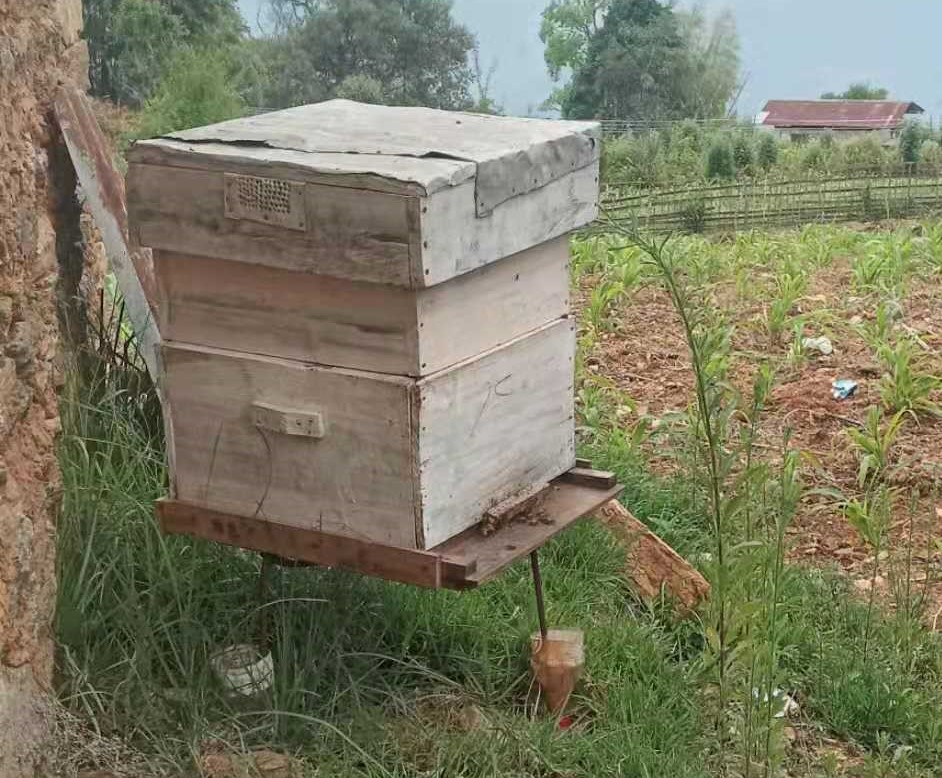 Bees play a very important role in agriculture and food production, and also in ecological, financial, and health. They have a greater role in contributing to sustainable development and in our ecosystem. The products of bees have high medicinal properties and can be easily marketed at a good price. The products are used for different purposes including supplements for nourishment and traditional medicine.

Beekeeping is a wonderful hobby that many farmers in rural Bhutan are adopting. As a secondary source of income, beekeeping is slowly but steadily gaining popularity in rural areas. With the financial support from CARLEP-IFAD, the Dzongkhag Livestock Sector has initiated beekeeping in various rural areas and has encouraged many farmers to take up apiculture due to its diverse benefits to the farmers, which includes minimal investment and labor, diverse products, and food crop pollination. To date, more than 70 Households received 10 days of training in Apiculture with fund support from CARLEP/IFAD under the climate-smart and resilient program.

One of the successful beekeepers is Mr. Pema Dorji, 56, from Gonpowong village under Shumer gewog(block), Pemagatshel. Pema started beekeeping in 2019 after completing 10 days of beekeeping training. He started his bee farm with 24 numbers of beehives. He rears Apis Cerana bees. Over the year, he has made a good income from selling honey.

Pema always wanted to do integrated farming. He begun dairy farming with two dairy cows and calves and also engaged in vegetable cultivation. Later, he began a semi-commercial poultry farm and until recently, he took up apiculture.

His interest in apiculture roused when he first ran into gewog livestock officials with the bee box at a restaurant. It was his first time seeing the bee box. He was curious about the beekeeping equipment such as Brood box, Frames, Honey supper, inner cover outer cover, Queen gate and asked the official about the know-how of the beekeeping. Accordingly, he received a briefing from Mr, Norbu, Livestock supervisor about the functions of the bee boxes and its benefits and contribution to rural livelihoods.

Although Pema was reluctant to take up beekeeping in the beginning due to the religious stigma associated with it, he made his mind to take up apiculture as there are more benefits to beekeeping than just the sweet reward of honey. Therefore, Pema approached the gewog livestock sector seeking assistance and fund support for apiculture.

In the ensuing year, he received beekeeping training. After the training, he established a bee colony with 24 beehives with funding support from the CARLEP-IFAD. Currently, he has 13 numbers of beehives. The drop in the number of beehives was caused due to absconding of bees due to cold during the winter months.

Despite the challenges, he worked hard and kept learning ways to take care of bees with much determination and enthusiasm. As result, he collected 30 liters of honey from his first harvest and sold at Nu.1500 per liter in the local market in 2020.  And earned Nu. 45000 from the sale of honey alone.

Pema feels that there is enough market for the local honey, unlike other businesses. “I could sell all my honey in the market as it has a traditional medicine property”, says Pema. With the income earned from the sale of honey, he can buy household items as well as save some in the banks for the expansion of bee farm in the future.

Pema feels that managing beekeeping is not difficult as it seems. “Unlike other businesses, people with no land or less land can start beekeeping and earn income for living as well as create employment”, Pema says.  He feels beekeeping is an important human activity and an integral part of the rural economy which can be adopted by anyone irrespective of poor or wealthy.

As much as he enjoys doing agricultural work, he enjoys managing his bee farm and helping others in beekeeping.

Pema and his family feel that beekeeping is a wonderful hobby in their lives as they can produce tasty and beneficial honey for their family as well as for the community. “Our bees not only help produce honey for us, but also help pollinate vegetables, flowers, and fruits for us and our community”, says Pema.

Like Pema, Mr. Chogyal Rinzin from the same village is also into beekeeping. They are the only beekeepers in the gewog (block) and have become exemplary ones with their knowledge of beekeeping. Despite their busy schedule, they do not hesitate to help interested farmers establishing bee colonies nearby their fields.

With their success in beekeeping, more farmers in the village have taken interest in learning the basics of beekeeping and are now adopting beekeeping as a fascinating hobby.

With the emerging keen beekeepers in the villages, the Dzongkhag Livestock Sector is planning to make Gonpowong village a top honey-producing village in the Dzongkhag.