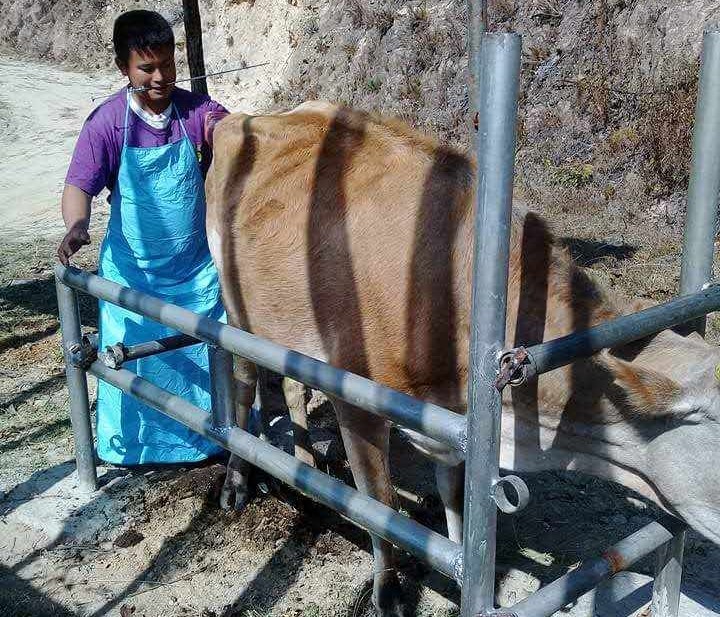 Artificial insemination (AI) is considered as one of the most important reproductive technology for improving the genetic potential of animals for increasing the productivity. The technology was first introduced on trial basis in the cattle in 1982 and was adopted in a planned manner in 1987.  Since its adoption, the Department of Livestock has established 106 AI outreach center covering all 20 the Dzongkhags. In the areas where AI services are not feasible, quality breeding bulls have been supplying from central farms and also from the Contract Heifer and Bull Production Programme (CHBPP) for the dissemination of genetic potential of selected elite males for breed improvement.

Despite such initiatives, due to rough geographical terrain, lack of adequate AI technician and multi-tasking of the Livestock extension officials, the services are not able to reach in many corners of the country. The problem is further aggravated by the increasing demand of veterinary services that are brought about by the rapid growth of livestock sectors, particularly with the intensification of dairy development and restructuring of livestock sector for accelerated livestock development in the 11th FYP. Thus, the need for Community-based AI Technician (CAIT) service delivery was found pressing in the commercially viable areas, where dairy and other commodity program activities are taken up at commercial scales. The Department of Livestock initiated CAIT in 2010, with the first batch of pilot training conducted on November 2010 at Rural Development Training Centre (RDTC), Zhemgang. As of now (up to May 2018), the department has trained 82 CAIT that are deployed in various parts of the country.

Understanding the importance of CAIT in filling the gap of technical human resources in the field, Regional Livestock Development Centre (RLDC), Kanglung in collaboration with relevant agencies had trained 29 people from six eastern Dzongkhag. The training was conducted with the fund support from CARLEP. The training was conducted for the duration of 27 days from 30th October to 26th November 2017 at City Veterinary Hospital & Satellite Laboratory, Dewathang, Samdrup Jongkhar Dzongkhag.

A case of Mr. Sangay Tenzin

Mr. Sangay Tenzin was one of the beneficiaries of the CAHW-CAIT training that was conducted and organized by RLDC, Kanglung with the funding from CARLEP. With the knowledge and skill that he got from the training, he currently provides services to two village- Themnangbi and Jaibab village under Mongar gewog. He also delivers his services to Themnangbi Om Tshongdril Gotsug Nyemlay Tshokdey and Jaibab Zambala Detshen which has 19 and 21 active members respectively. The groups produce approximately 5042 liters of milk in a month as detailed in Table 1. The milk is sold at Mongar town at Nu. 50 per liter. When calculated, the groups together earn a gross income of approximately Nu. 252,100 per month (average milk quantity x market price). Both the groups were started in 2007.

Prior to the training of Mr. Sangay Tenzin as the CAHW-CAIT, the dairy farmers of these two villages had to avail the services all the way from District Veterinary Hospital (DVH), Mongar which is about 24 km from their village. Because of the long distance, it was often difficult for the farmers to access the services when they required. Now, with his presence, the farmers in these two villages can readily avail of the services that will contribute to the livestock development program.  Apart from the Artificial Insemination, the dairy farmers also can rely on to Mr. Sangay for any health complications of the animals.

Mr. Sangay Tenzin delivered the first artificial insemination on his neighbor’s cattle on 16th December 2017, exactly twenty days after the completion of the training. The case went successful, and that has further aggravated the confidence and professionality in him to deliver more similar services. And thus, he continued serving more.

For the smooth flow and acceptance of Mr. Sangay’s service in the community, an awareness program was provided to the farmers along with the guidelines and agreement between the farmers themselves and the officials from Regional, Dzongkhag and the Gewog Office. The accessories like semen bank, reservoir cans, and portable cans were provided by RLDC, Kanglung. CARLEP supported apron, AI gun, surgical kit, and thermometer. Similar support had been provided to other CAITs of Samdrup Jongkhar, Pemgatshel, Trashigang and Mongar Dzongkhags wherein they share the similar success stories.

As of now (up to 16th May 2018), Mr. Sangay has done 33 inseminations in Themnangbi village and 16 inseminations at Jaibab Village as presented in Figure 1. For each insemination, he earns service charges of Nu. 200 from the cattle owners of Themnangbi villages and Nu. 350 from Jaibab Village. The difference of the charge is owing to the distance he has to travel. From the total of 49 inseminations, he earned an income of Nu.12, 000. If all inseminated cows conceive, he would earn Nu 600/conceptions for male calf and Nu. 1000/conceptions for female calf which is a quite a good amount for his family. He does not charge for the repeated insemination for the same cattle. The rate of the services charges is fixed after the discussion and agreement with the farmers in the community.

The Community based AI Technician (CAIT) has immense benefit to the communities in terms of improving the breeds and reaching AI and animal health services to every corner of the country. It increases the technical human resources capacity in the field and helps to meet the increasing demand for AI and animal health services which are occurring due to the gradual transition of livestock farming from subsistence to commercial farming. The program also provides employment to the youth and will helps to maintain the sustainability of the AI program in the field due to community participation. Continuations of such program in the future will definitely improve the livelihood of rural people.

The team would like to thank Regional Livestock Development Centre, Kanglung and Dzongkhag Livestock Sector, Mongar for giving us access to all the related data.  We are also indebted to Mr. Sangay Tenzin, who provides all the details of his contributions in his community.