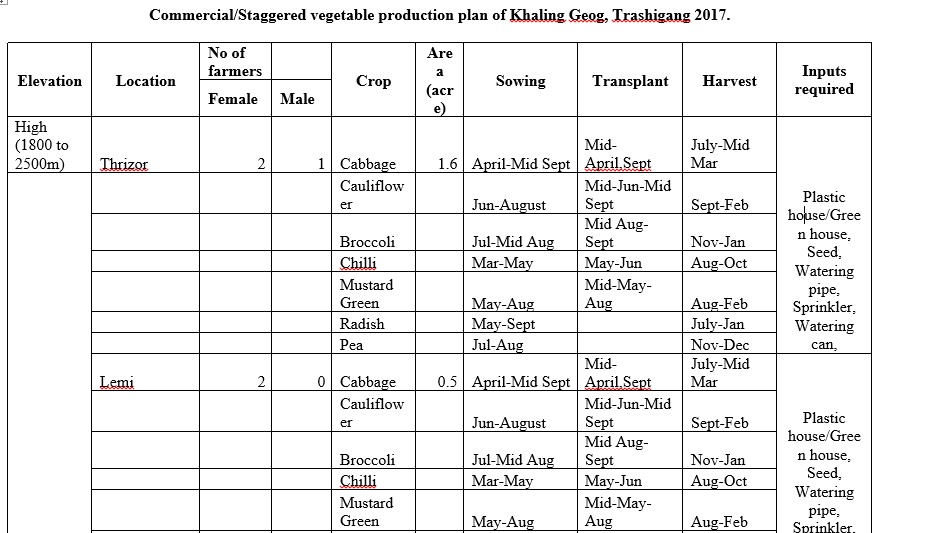 A total of 30 Geog Agriculture Extension Officers (GAEOs) were trained on the ‘Staggered Vegetable Production’ at ARDC (Agriculture Research and Development Center) at Wengkhar under the fund support of CARLEP in early May, 2017.

The training was followed-up by the need to come up with the staggered vegetable production plan by each GAEO to implement in their respective geog, depending upon various Agro-Ecological Zones (AEZ).

Accordingly, the Agriculture Extension of Khaling geog has developed a ‘Staggered Vegetable Production Plan’ from 23rd till 25th May, 2017 in consultation with the geog administration, local leaders and the farmer representatives.

The planning was primary based on the elevation and the location of each village, where by, the type of vegetables to be cultivated, the sowing time, transplanting time and harvesting time were determined. In addition, the number of HHs (Households), inputs required and the area to be brought under cultivation for each vegetable is also planned and documented. (Find the detail of the staggered vegetable porduction plan of the geog: Here.)

The first Staggered Vegetable Production Manual for the eastern region was developed by the Horticulture Sector of ARDC under CARLEP’s support in earlier this year.