The long-standing problem of human-wildlife conflict is becoming more frequent, more serious, and more prevalent around the world. Unfortunately, the preservation of biodiversity has a negative impact on human-wildlife encounters. This hinders the parallelism of global biodiversity conservation programs and the sustainability of local livelihoods and development.
On the other hand, climate change is affecting the entire ecosystem of the planet. The global agricultural production system is expected to change in response to climate change, posing a major challenge to the livelihood and food security of people worldwide. Similarly, environmental change threatens wildlife habitats and resources. The Sikkim State of Environment Report (2016) states that climate-induced changes have directly or indirectly affected wildlife habitat and food distribution. This is directly related to the increased incursion of wildlife into villages, leading to increased human-wildlife conflicts. Similarly, a study published in the Mammalian Biology Journal, India, confirmed that an increase in temperature and delayed rainfall means shorter winter hibernation for black bears and more intensive foraging. As a result, there is increased competition for resources between humans and wildlife. The problem of human-wildlife conflict is therefore likely to be exacerbated by climate change as different life forms adapt to changing climate events. The result of the participatory vulnerability assessment of CVS previously conducted by ARDC using a ranking analysis also showed that crop predation by wild animals was the most common threat to the community in CSVs.

A Solutions to an Increasing Human-Wildlife Conflict

To enable sustainable, nature-friendly agriculture that ensures food security in addition to biodiversity conservation, there is a need to consider how communities can manage sustainably with wildlife. In this context, ARDC-Wengkhar has identified electric fences as one of the most important interventions for sustainable food production in climate-smart villages without disturbing other components of the biosphere.

In the fiscal year 2020-2021, a total of 320.03 acres of land in 5 CSVs were protected from wildlife with the establishment of 25.67 km of electric fence (Table 1). The project cost is Nu. 4.06 million and benefited 118 smallholder farmers. Apart from Phelumo CSV under Orong geog, Samdrup Jongkhar which opted for electric fencing, all the other 4 CSVs were equipped with solar fencing. ARDC has captured some research results in fencing by using HDPE with specified dimensions to replace the wooden posts at Bainangkhar CSV site with the objectives to minimize dependence on forest resources for fence posts. 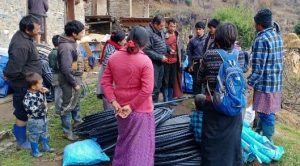 Hands on Training on EF

The establishment of EF was carried out at all sites through hands-on training of beneficiaries. Prior to the physical setup, participants were familiarised with various items needed for electric fences and the safety measures to be taken while handling the fencing accessories. The participants were also taught the requirements for the aftercare of the fence.

Although the purpose and positive effects of this technology have been well understood worldwide, it is noted that the area under cultivation in Bhutan is decreasing annually, provided that human-wildlife conflict is the main cause. Nevertheless, the EF impact assessment conducted by the National Plant Protection Center found that EF has many desirable impacts in Bhutan. More than 90% of the respondents rated highly the social impacts such as reduction in family and community conflicts and more time for economic activities (less guarding time). However, the impacts of the specific EF, built at 5 CSVs are yet to be determined.

The EF in 5 CSVs is established with funding support from CARLEP-IFAD, MoAF. The beneficiaries have contributed labor and fence posts, which account for nearly 27% of the total cost of establishing the fences, based on the costing of the fences prepared by ARDC-Wengkhar in the past.