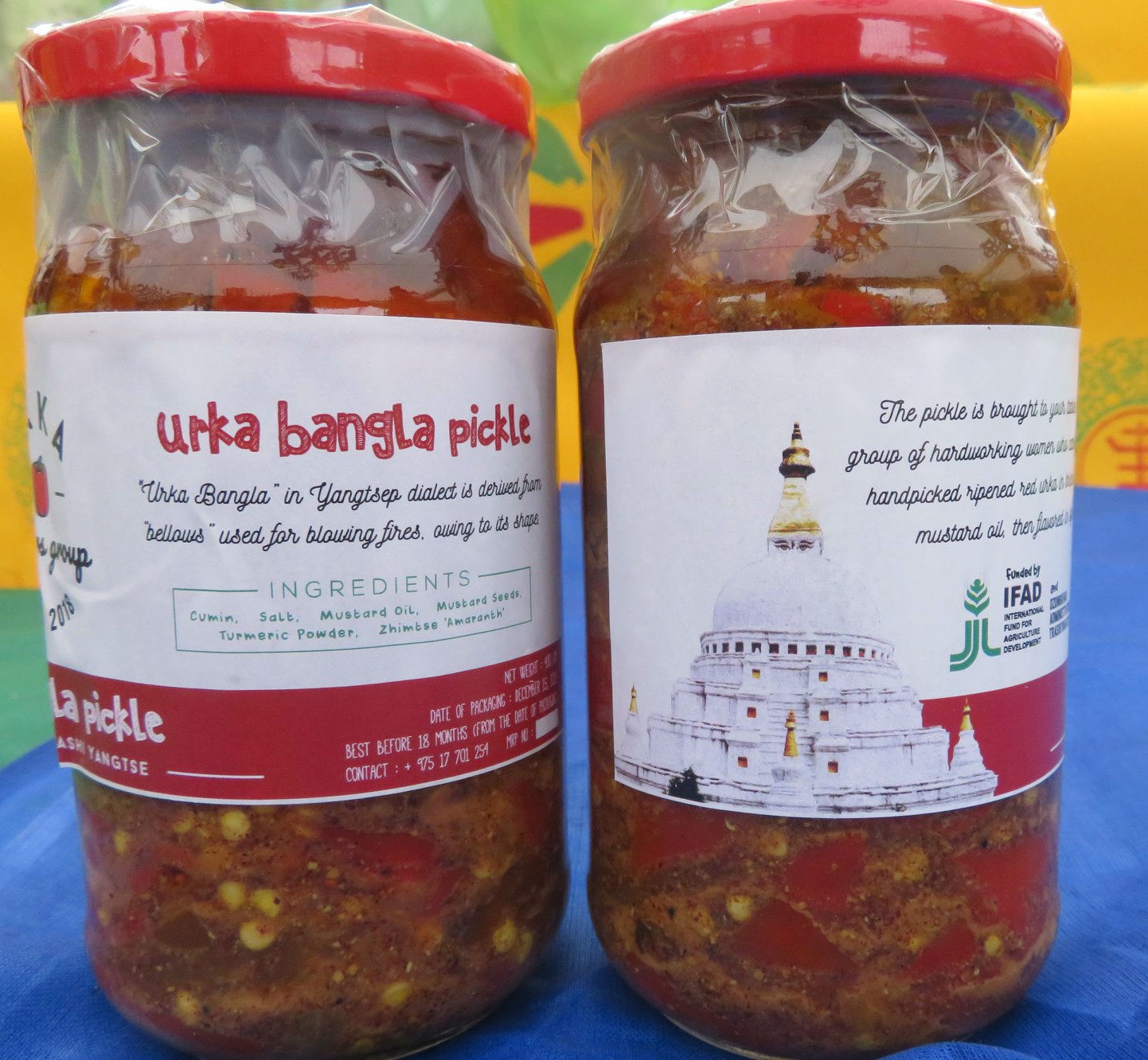 The Urka Bangla (local chili variety) of Trashi Yangtse has a shape almost like a capsicum and slightly more pungent in taste but not as hot as other chilies which makes it pleasant to the palate. The Dzongkhag identified the variety as one of the commodities for enterprise development in 2015 considering the uniqueness and popularity of the variety. However, the cultivation faced various challenges such as wilt disease, post harvest losses, and price decline during the peak season, and its  short shelf life make it less economical for transporting to other markets. Traditionally, chili is sold fresh or sun dried, but unfavorable weather –rain and humid environment makes it difficult often leading to post harvest losses.

Earlier in 2013, the existing post-harvest electric drying technology developed by the National Post Harvest Centre were promoted through IFAD funded Market Access and Growth Intensification Project (MAGIP). Today, a total of 41 dryers are used in Yangtse and Boomdeling gewogs. While the use of the dryers have been effective in drying the chili, its design tailored for small scale household level drying was not appropriate, especially during the peak season.

The Dzongkhag Agriculture Sector in collaboration with the Agriculture Research and Development Centre (ARDC) Wengkhar, started a focused intervention program in 2016. Initially, a group comprising of 17 members from Wongminang village was trained on seed selection and cultivation improvement practices. The ARDC has also simultaneously carried out ex-situ seed conservation of Urka at the centre.

In 2018, the group produced about 46 MT of Urka, of which most were processed through drying and pickling. With fund support from CARLEP – IFAD, the Dzongkhag has expanded interventions through trainings and group formation of Urka growers to another three communities. The technical skills in processing was further expanded to others through the Lead Farmer Approach. The members who were trained in first batch extended their trainings to two other groups.

In 2017, ARDC Wengkhar began developing solar dryer with fund support from CARLEP-IFAD. The innovative technology was developed inside greenhouses incorporating solar operated exhaust fans. To cut short the process, a parallel on station trial and on farm research began first in Boomdeling with the chili growers’ groups. With technical assistance from ARDC Wengkhar and IFPP, Lingmethang, the growers were provided with hands on training on the development of the solar dryers followed by establishment. Furthermore, exchange visits to the centre aimed at studying the first prototype and further discussion on solar dryer development were organized by the Dzongkhag. By the year 2018, a total of three solar dryers have been established in Boomdeling.

According to the groups, pickling has higher advantages compared to dried chili and wet chili selling. For instance, a total of 20 kilograms of fresh Urka can fetch upto Nu. 1600 to 2000 during peak season in the local market but when the same quantity is pickled, it can fetch Nu. 8000. Depending on the quality, a kilogram of dried Urka fetches upto Nu. 1400 to 2000. Moreover, eight to ten kilograms of fresh chili can make up to one kilogram upon drying. Besides reducing post-harvest losses during the peak season and generating additional income from the produce, the program has helped the growers in conserving Urka, one of the rapidly declining traditional crops. Moreover, the initiative has helped female farmers with additional cash income generation. With successful branding of their product, the groups plan to add value to other vegetables through pickling.

As of now, a total of forty-one electrical dryers and three solar dryers have been established. Pickling of Urka was started since then. With this initiative, adequate post-harvest interventions were put in place. The growers’ groups trained in pickling focused on expanding their production, improving packaging and labeling. Coinciding with the 111th National Day Celebrations, the Dzongkhag and the growers launched the first batch of Urka Bangla Pickle as a brand product of the Dzongkhag. About 1500 bottles are targeted for the market and the product is expected to expand upto 4000 bottles and more depending on the market linkages. Currently, the growers are selling their pickles in the local market and the One Geog One Product (OGOP) outlet in Thimphu. Trial marketing with OGOP enabled the group to double their income through value addition. The Dzongkhag and the Regional Agriculture Marketing and Cooperative Office (RAMCO, Mongar) will intervene in marketing and expand their small farm business particularly benefiting women farmers to become local entrepreneurs. Their interventions will indeed enhance the income of women.

This value chain intervention at various stages has now enabled farmers to expand their chili productions. Further, the Dzongkhag plans to set up a small scale agro processing unit with the fund support from the project. With the set up put in place, the growers will not only expand their cultivation following improved management practices but will also begin to diversify post harvest product and value addition processing– fresh chili during the initial period of harvest followed by pickling and drying.