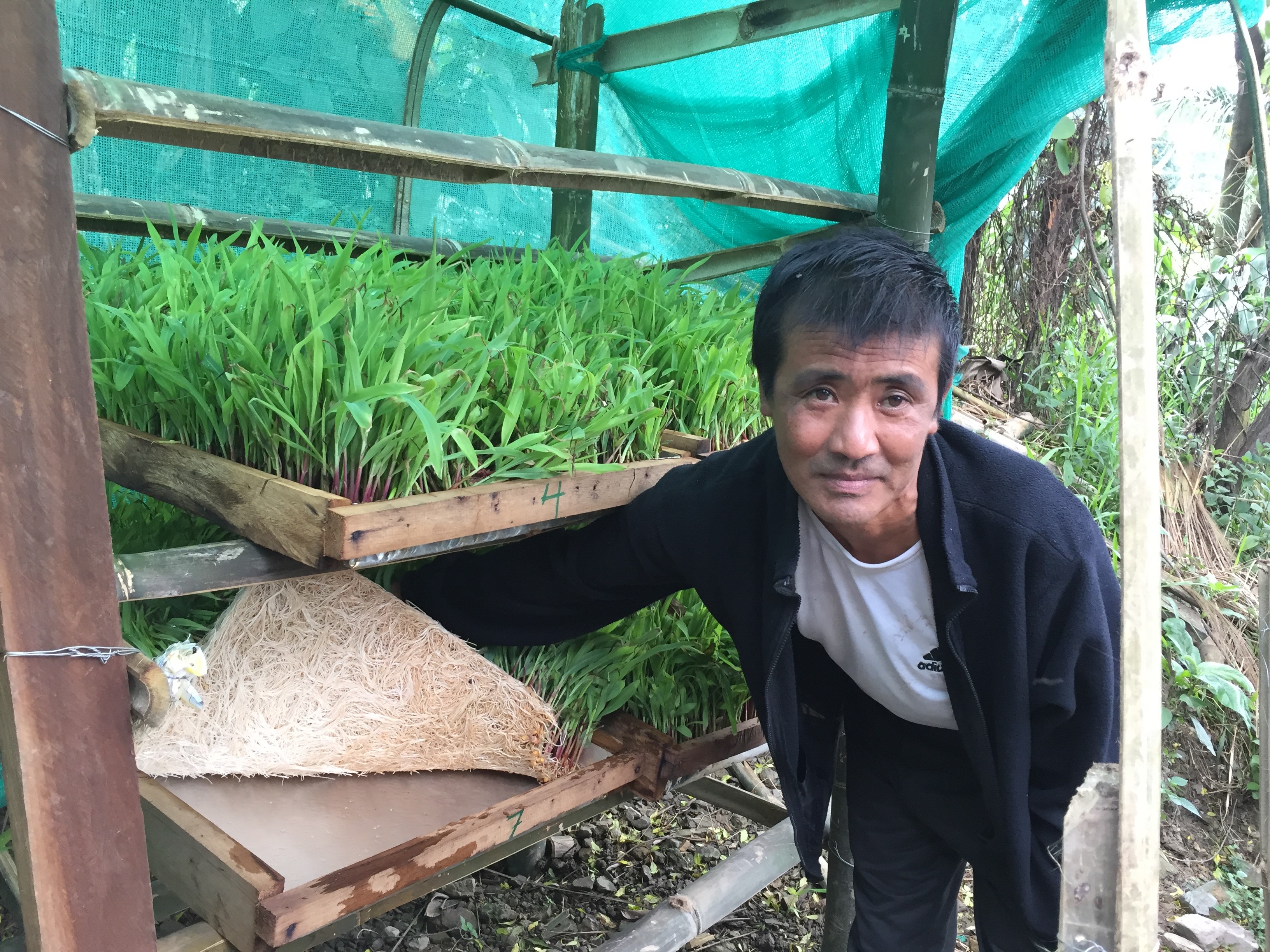 Abstract: – Green fodder feeding to Livestock ensures optimization of productivity. The pasture land has declined over the year. However, fodder production is gaining momentum through Government initiative providing pasture seeds and fodder saplings. A smart method called ‘Hydroponic’ which means growing plants without soil by using nutrient water at desired temperature and humidity. Through hydroponics it is easier and quick to produce nutritive green fodder. A Crop like Maize, Ragi, Bajra, Cowpea, Horse gram, Sun hemp, Jowar and Foxtail millet seeds are found to be suitable to grow by hydroponic method.

Bhutan is traditionally a Land of Crop and Livestock dependent farming system. The area of the country can roughly be divided into forest 60%, pasture 6%, arable land 1.2% and unproductive land 32.5%.

Bhutan, as all Himalayan countries is limited with less arable land due to terrine topography. Fixed farming is an idle situation and integrating pasture with fruit trees are best option provided to the farmers.  Around 90% of its people depend to varying degree on livestock activities. The climate and topography allow only limited increase in prime agriculture production whereas there is a potential in the animal husbandry enhancement production, if the fodder resources are being developed.

Therefore, it is important apply and adopt various proven technologies that are available in the fields. Not limiting to few methods of interventions we need to create and disseminate as much as many Farmer friendly technologies that can be adopted easily. Thus, gives more options for the rural Farmers. One of such technology is the Fodder Hydroponic. Hydroponics is the state of the art technology that has revolutionized the green fodder production in the 21st century. Hydroponics is a method of growing green fodder without soil in an environmentally controlled houses or machines. Many of the livestock farmers are switching to hydroponic fodder production from conventional production methods, as the fodder produced by this method are highly nutritious, provide sustainable fodder production round the year and conserve water.

Bhutan has a livestock unit of 232,000 plus (including cattle, yak, horse, sheep and goat). Approximately 765,000 MT of dry matter are required to feed the entire Livestock per year.  It is estimated that this need is presently covered as following.

Natural diet for animals. Improves fat percentage in milk. Rich in beta carotene and helps in synthesis of vitamin A. Vitamin A has greater impact on reproduction.

Consumes 98% less water than conventional method and the used water is recycled.

As a demonstration and trial 40 kgs of maize seed was used. In each tray-soaked Maize was measured and spread on the tray sheet. Following are the immediate It was found that 1kg of seed gave 8.5 to kg of Maize fodder. Maize fodder was fed to milking cows and found sudden increased in milk yield between 1to 1.3 liters/day.

It can benefit Dairy farmers without much investment in the resources. They can use local material to make simple shed to grow green maize fodder for winter for milk production.

Production cost is optimal when compared to conventional fodder production.Cost of production is Nu.2.50/kg of hydroponic maize fodder.

This process takes place in a very versatile and intensive hydroponic growing unit where only water and nutrients are used to produce a grass and root combinations that is very lush and high in nutrients. 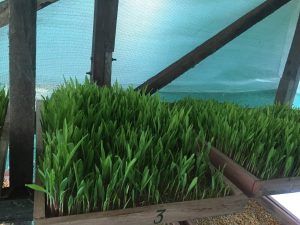 This green fodder is extremely high in protein and metabolisable energy, which is highly digestible by most animals. This method of producing green fodder has many advantages for the farmer, the economy and the environment. In short; it reduces water usage, marginal land use, constant food supply, reduced growth time, reduced labor requirement, cost effective, high nutritional value, completely natural.

It takes more than a week to grow ready fodder while it took 45 days for a conventional fodder (Napier) to grow. Enhanced nutritive value – as the fodder contains the seed along with the fodder, it has higher crude protein content than conventional green fodder.

Moreover, maize is abundantly grown in the villages biannually whereby production is usually high. It does not need sophisticated technology or materials where Farmers can easily use local material available for the fodder production. In management aspect it needs twice watering which is not very labor intensive.

Unfortunately, there are also disadvantages in growing fodder in such a controlled, humid, moist environment. Some of the problems that affect the yield production are Mould, Bacteria and fungi. Sometime, if proper drainage or trays are not inclined it trends to rot and spoilage. During cold winter months the growth is slow and not vigor as summer.

Hydroponic fodder systems make the most sense for organic and grass-fed livestock operations. It can be a major feeding option when pastureland and hay are in short supply or adds a highly nutritious and relished supplement to stall feed semi intensive farming. Besides, Bag silages and roughages it is the source of vitamins and minerals for the Livestock production. Hydroponic fodder is successfully implemented in Rekhey and Marthang Chewog under Dewathang Gewog, Samdrup Jongkhar. This provide an alternative choice to the diary farmers. The detail technology packages with the Dzongkhag Livestock Officers, and Livestock Extension Officers of Samdrup Jongkhar.