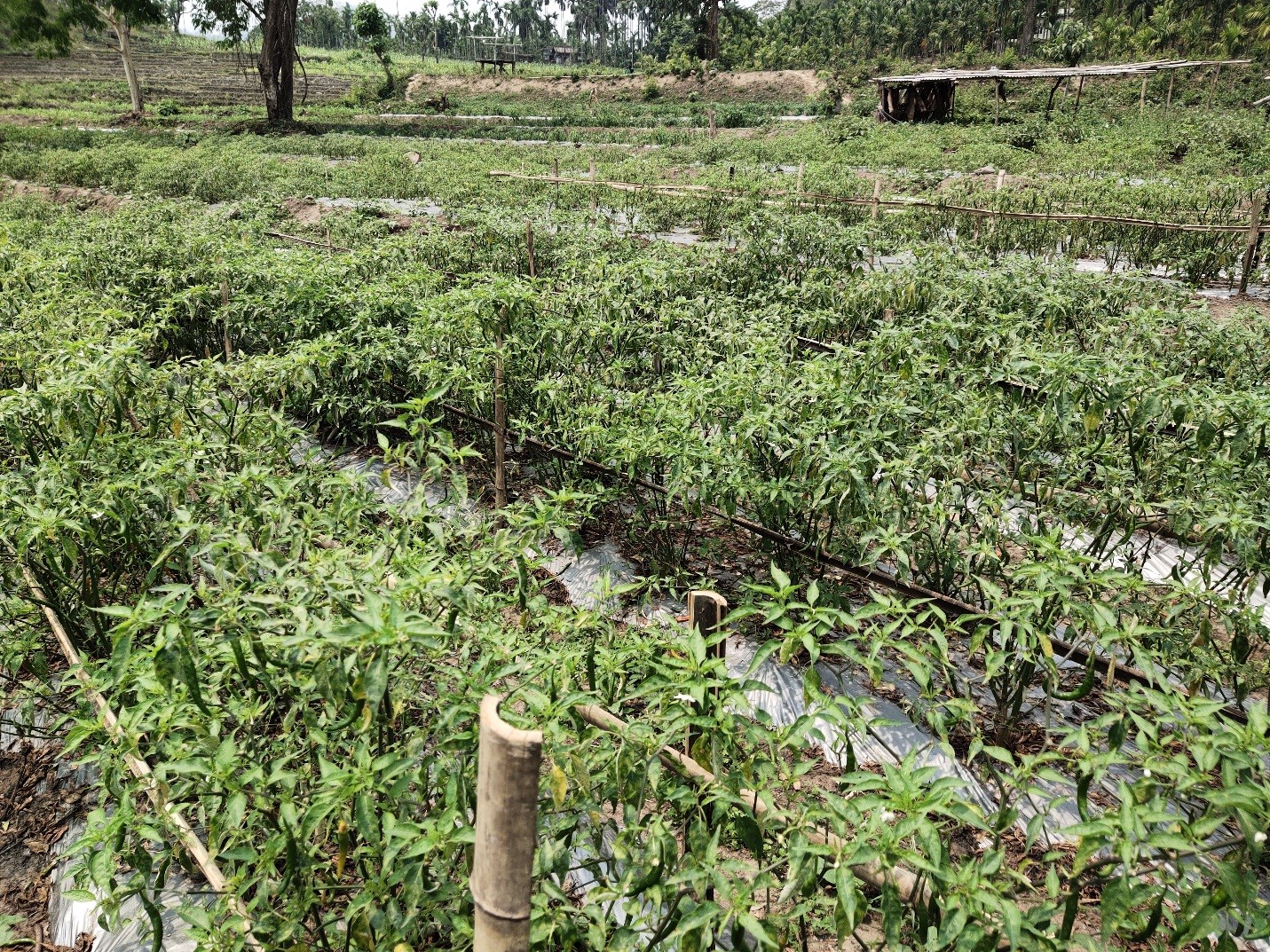 Over the years, Langchenphu farmers under Samdup Jongkhar Dzongkhag practiced subsistence farming where they only grew crops for self-consumption. Farmers were reluctant to take up mass cultivation of vegetables owing to poor market accessibility and low price for the commodities. But recently, many farmers in Langchenphu gewog have come forward to take up mass vegetable cultivation especially chili due to promising income-generating opportunities through vegetable commercialization in the wake of COVID 19.

With the enforcement of import banned on certain chemical-laden commodities such as chili among many others, the Department of Agriculture initiated a winter chili production program in the country to meet the market demand. Henceforth, Langchenphu farmers ventured into mass chili cultivation. In FY2019-2020, a total of 15 households began winter chili cultivation in 5.6 acres of their landholdings.

With fund support from CARLEP-IFAD, and other funding agencies which include ECP, NOFP, GDG and CSI,  the farmers were supported with the construction of dryland irrigation, installation of water-efficient technologies such as drip irrigation, sprinklers and rainwater harvesting technology, and other materials which include HDPE pipes, water sintex tanks, electric fencing, assorted vegetable seeds, mulching plastic, polyhouse, polytunnel plastic for raising nurseries and bio-pesticides.

In the first year of cultivation, the farmers produced 1.53 MT of chili which fetched them Nu.315,000. With the good returns from the chili sale, farmers were instigated to work harder as well as caught the interest of many farmers for mass chili cultivation.  In the ensuing year, 39 more HHs joined the group and the area under chili cultivation expanded from 5.6 acres to 47 acres.  Of the total cultivated land, 39 acres are Government Reserved Forest (GRF) land lease and rest are own landholdings. Out of 54 HHs, 9 HHs are from Jangsa, 2 HHs from Namchazor and 13 HHs from Langchenphu and 5 HHs from Dawathang, 11 HHs from Jampani, 12 HHs from Agorthang and 2 HHs from Jangsawom.

In 2nd year, the farmers produced 6.75 MT of chili and earned more than Nu.2,240,000. The farmers attributed increase in income to higher production of off-season chili due to better access to modern farming technologies and supports from the multiple agencies.

Currently, the chili is marketed in the local market, institutions, Samdrup Jongkhar Town, Deothang and Samdrupcholing Dungkhag. As there are high demand for winter chili in the country, the farmers are planning to expand their market to other Dzongkhags such as Tashigang and Monggar or beyond.

As the winter month is approaching, the farmers prepare for winter chili cultivation.