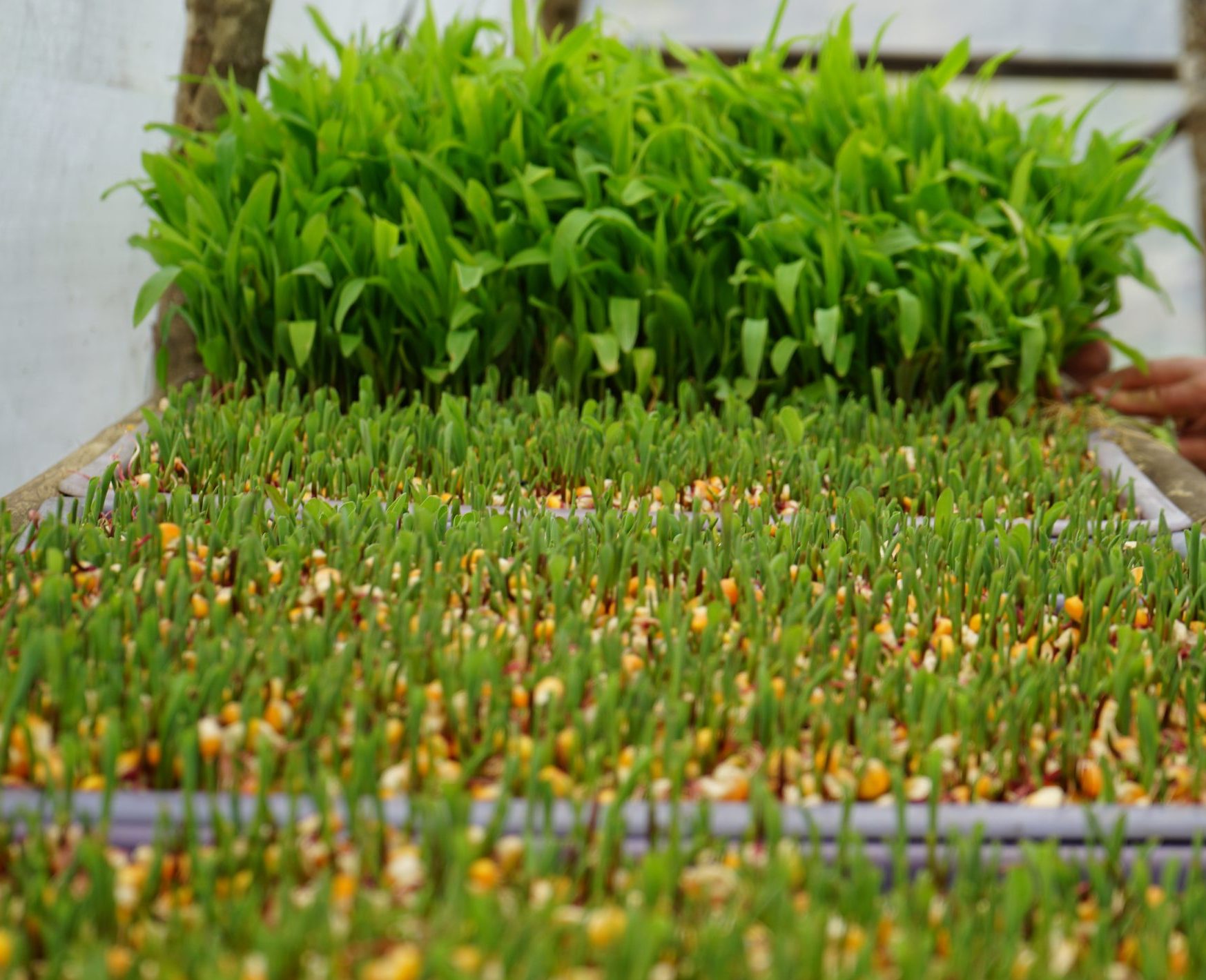 Green fodder is an economic source of nutrients for dairy cattle. It helps in improving the digestibility of crop residues under a mixed feeding system. Likewise, increased use of green fodder in animal feeding may reduce the cost of milk production and have a positive impact on livestock whereas inadequate quality fodder can deteriorate animal’s growth, milk production, and reproduction.

Until recent years, most of the farmers practiced open grazing in forests, which often led to environmental damages. With the development in dairy farming, a mixed feeding system is slowly replacing the open grazing system. With stall feeding, the demand for green fodder has significantly increased. However, meeting the demand for green fodder has become the greatest challenge for dairy farmers, especially during the dry season. Subsequently, milk production is greatly reduced during the winter months. Dairy farmers attributed the fodder shortage to limited land for fodder development, water scarcity, labor shortage, sloppy terrain, and harsh weather conditions.

Lhuentse dairy farmers now have found solutions to their fodder shortage. Farmers have started adopting Hydroponic fodder development, an innovative method to grow fodder in water under a protected environment without using soil.

Assistant Dzongkhag Livestock officer revealed that the district livestock sector has initiated six pilot hydroponics fodder in two gewogs under Lhuentse Dzongkhag i.e., Minjey and Maenbi gewogs with financial support from the Commercial Agriculture and Resilient Livelihoods Enhancement Programme (CARLEP). He added that the technology has been initiated to help farmers cope with fodder shortage, especially in winter seasons, thereby maintaining optimum milk production in the Dzongkhag in all seasons.

“As maize is a predominant crop abundantly grown in the villages twice a year, farmers can easily grow fodder using available local materials. The installation of a low-cost greenhouse costs around Nu: 15000 at a bare minimum”, ADLO, added.

Thinley Jamtsho, 46, a member of a dairy group from Thinleypang under Maenbi gewog, Lhuentse has been growing hydroponic fodder for the last three months and has seen an increase in milk production.

“I have 14 cows and feeding them in the winter season is challenging due to scanty fodder. I had so much trouble sourcing green fodder in earlier days. We used to collect green fodder from forests every day, which is becoming scarcer. Sometimes I only fed banana leaves mixed with maize grits to cattle”, said Thinley Jamtsho.

But now, Thinley feels that his problems have been addressed with the adoption of new technologies. He received support for the purchase of trays, greenhouse plastic and seeds from CARLEP_IFAD.

He produces 7-8kg of hydroponic fodder from 1kg of maize and soybean seeds and feeds his cattle daily. Unlike other dairy farmers, Thinley continues to have optimum milk production in the winter season.

“Ever since I started feeding my cows with the green fodder, I have noticed an increase in milk yield,’’ Thinley added.

In the past, he could barely produce 15-16 liters of milk per day in winter due to fodder shortage. At present, he produces 20-25 liters of milk per day, attributing the increase in milk yield to hydroponic fodder. He sells about 20 L of milk to a dairy group and the rest is sold in the local market.

Like Thinley, other farmers adopting hydroponic fodder have also achieved great success and have benefitted from the technology. With the positive feedback from the farmers, the Dzongkhag now plans to replicate the technologies in other gewogs in the next financial year.

Hydroponic fodder is also successfully implemented in Samdrup Jongkhar and Mongar Dzongkhag as an alternative fodder choice to the dairy farmers, with fund support from CARLEP-IFAD/MoAF.