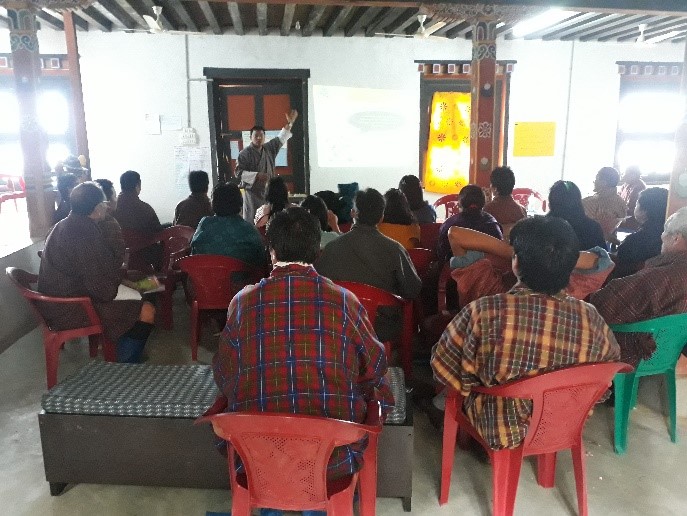 Majority of the farmers’ organizations in Lhuentse Dzongkhag lacks cohesiveness. Minjey Dairy Group is one among many others plagued by this situation. Lack of proper book of accounts is a contributing factor for growth of mistrust among members and the office bearers. The resulting outcome is non-cooperation between the members and gradually paralyzing the local institution from progressing further.

Despite of several downsides Minjey Dairy Group continue to function with technical support from the Dzongkhag Livestock Sector. At present, Minjey Dairy Group has 25 members (13 female, 12 male) producing 150-180 litres of milk daily. The milk is processed into butter and cheese which are sold at Nu. 270 per kilogram and Nu. 30 per ball, respectively. The group has small processing unit equipped with cream separator, butter churner and refrigerators. Cheese is processed using traditional method.

With the objectives to introduce individual farm record keeping practices and maintaining proper book of accounts; a 3-day training was imparted to the members of Minjey Dairy Group from 12th-14th July 2017 in Minjey gewog under Lhuentse Dzongkhag. The event was organized by Dzongkhag Livestock Sector with resource persons from Regional Agriculture and Marketing Cooperatives (RAMCO), Mongar. The training program was supported by CARLEP-IFAD.

“This type of training is a blessing for me. I was able to understand the importance of keeping farm records and book of accounts”, said Mrs. Yangchen, one of the member participants, during the final day of training.

The group is currently working on to process unskimmed set yoghurt. Livestock Production Officer said “all the basic equipment for yoghurt processing are ready with Dzongkhag Livestock Sector”. The yoghurt is aimed at a niche market (Lhuentse town, Autsho satellite town, central schools and boarding schools).