Located at lateral highway between Mongar and Trashigang, Yadhi is a hamlet under Ngatshang gewog. At present, whole stretch of village makes up “Yadhi Milk Group” comprising of 60 active members which evolved from mere 15 member group, who possessed not more than one or two dairy cows that too including local breeds, when it was formally instituted in 2010. Back then, collection and processing was a nightmare since the production was not sufficient for processing. Today, the group collects 200-250 liters of milk every day and process into butter and cheese at the Milk Processing Unit (MPU). 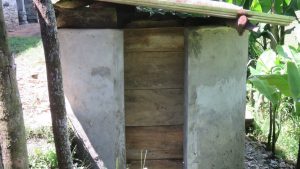 Although the group witnessed mild progress in terms of membership and production during the last half decade, the full potential remain untapped mainly due to lack of knowledge on increasing fodder resource base, as feed and fodder accounts for more than 70 % of the production cost in dairy farming. The group members were skeptical that dairying with limited land holdings may not be possible. In the past, farmers have been depending on forests for its fodder when they rear local cattle. Now with change in livestock rearing system from forest grazing to stall feeding, abundant fodder availability in homestead is required for successful dairying. From this perspective, scarcity of land is directly proportional to scarcity of green fodder which is one of the main hindering factors in taking up dairy farming. Despite these challenges, smallholder dairy farmers of Yadhi have travelled a long way paving road to robust dairy development through the support of Government and past IFAD interventions. 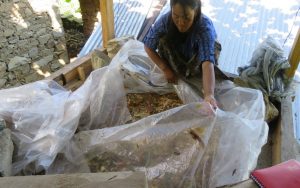 Beneficiary checking her silage after one month of conservation at Yadhi

Fodder shortage at Yadhi is largely a winter phenomenon when climatic conditions coupled with lack of irrigation makes the situation of fodder development worst.  It is evident from the unavailability of cheese and butter in the market during winter months. This problem arises when the dairy animals undergo nutrition crisis making milk yield to decline drastically. However, during summer months when the area is covered with green (natural grasses) and abundant crop residues (maize stalk), the animals get aplenty to feed upon and this is the time where the farmers encounter seasonal surplus of dairy products (butter and cheese). 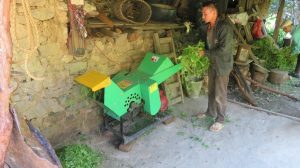 To continue to boost dairy sector in particular, livestock sector has been emphasizing on increasing fodder resource base, especially in winter months, by capitalizing on the surplus fodder available in summer months. Likewise, CARLEP-IFAD’s focus is on how to improve animal nutrition so that the production corresponds to dairy value chain which is the main impetus of the CARLEP-IFAD project. Therefore, CARLEP has made provision of subsidiary support for fencing pasture area, supply of free seeds and seedlings, supply of chaff cutter, material support for construction of silo pit, demonstration and training related to fodder conservation and crop residue enrichment techniques. All these activities were undertaken through Dzongkhag Livestock Sector.

The most prominent result one can see in the field is 50 silo pits were supported through CARLEP-IFAD and it’s amazing to appreciate that all 50 pits are filled with silage (maize silage) which is one to two months old. What is more interesting is chaff cutter has proven wonders when the small equipment could chop approximately 3000 kgs of fodder per hour. “Silage making would not have been materialized if all the chopping has to be done manually in absence of wonderful chaff cutter supported by CARLEP-IFAD,” said Tashi Tshomo, one of the beneficiaries of the Programme. Dechen Zangmo, another beneficiary of the Programme said, “Come winter season, I don’t have to worry about fodder as I have ensiled about 12000 kgs of maize in the silo-pit.” Acknowledging the support of CARLEP-IFAD, Yadhi dairy group members are optimistic and looking forward to achieving optimum milk yield during lean season by feeding silage prepared during this time of the year (summer and autumn seasons). 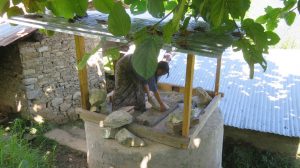 Chaff cutter not only encouraged farmers to make silage but has also reduced household drudgery in chopping fodder grass and it improved digestibility and minimized wastage. “I had to chop maize stalk and napier grass manually before which took away so much of my valuable time. Now I can chop within no time and I get plenty of time to do other works- Thanks to chaff cutter,” said Tshering of Pelshub village under Ngatshang gewog. 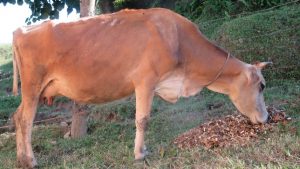 A photo of animal fed with maize silage at Chaskhar

The Senior Livestock Extension Officer of Ngaatshang gewog said, “I made the members to compulsorily construct silo-pit and after the constructions were complete I imparted practical demonstration of fodder conservation (silage making technique) in one of the members’ field.” This demonstration was critical for other farmers to take up the technology and within a week or two all other farmers who constructed silo-pit picked up and adopted the technique. He adds on and said, “Every silo-pit is filled with silage and they can feed their animals during winter and I hope the production will definitely increase as compared to last winter.” Some of the farmers have already started feeding one month old maize silage and found out that intake by the animals are promising.

Taking advantage of seasonal surplus of fodder and converting it into silage or hay complemented by some other fodder (nutrient enrichment of paddy straw, maize stalk, fodder trees) and concentrate feed could potentially supply year round fodder requirement of the animals, provided right technique and suitable environment is created to the farmers through subsidiary support as is provided by CARLE_IFAD project in the east. Because of these, the smallholder dairy farming in the east has immense potential for growth and increasingly remain largest producer of milk among the regions of the country.

Similar support was given to other groups (Redaza, Ngatshang, Chaskhar) under Mongar Dzongkhag and farmers have started reaping benefits of the CARLEP-IFAD project in the east.