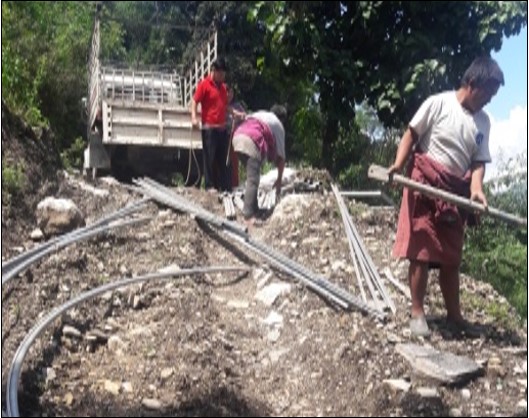 The cultivation of vegetables on a commercial scale has gained much popularity among the farmers in the east. This is driven by the higher market demand for the local products and also because of the production supports rendered by CARLEP-IFAD to increase the economic returns and nutritional status of the rural poor.

However, the topographical phenomena like stiff terrain, sloppy gradient still limits the farmers from large-scale production of vegetables.

Therefore, CARLEP-IFAD supports the land development on a cost-sharing basis for upscaling the production scales and the production areas, which will increase the economic returns to the farmers.

In 2016-17, Trashigang Dzongkhag has invested in the development of 3.5 acres of dryland and another 0.5 acres of wetland in Tonling Pam under Radhi gewog under the support of CARLEP-IFAD. These 4 acres of land which initially was sloppy and stiff terrain was flattened to make the farm mechanization feasible. The 4 acres of developed land is owned by a total of 8HHs including a woman-headed household.

The beneficiaries plan to cultivate the vegetables in the whole stretch of the area from this coming season. A vegetable production group comprising of six members is already established. The group received the greenhouse and the seeds and seedlings support to start with the mass cultivation of the vegetables.

With the formation of this vegetable group and land development, Radhi gewog whose majority of the population depends on the seasonal cereal like maize are finally venturing into commercialization of the vegetables.

This shift from the dependence on subsistence-based cereals to the commercialization of vegetables is expected to increase the economic returns to the farmers and also contribute in substituting the nationally import-banned vegetables.