Roles of Women in Vegetable Value Chain in the East 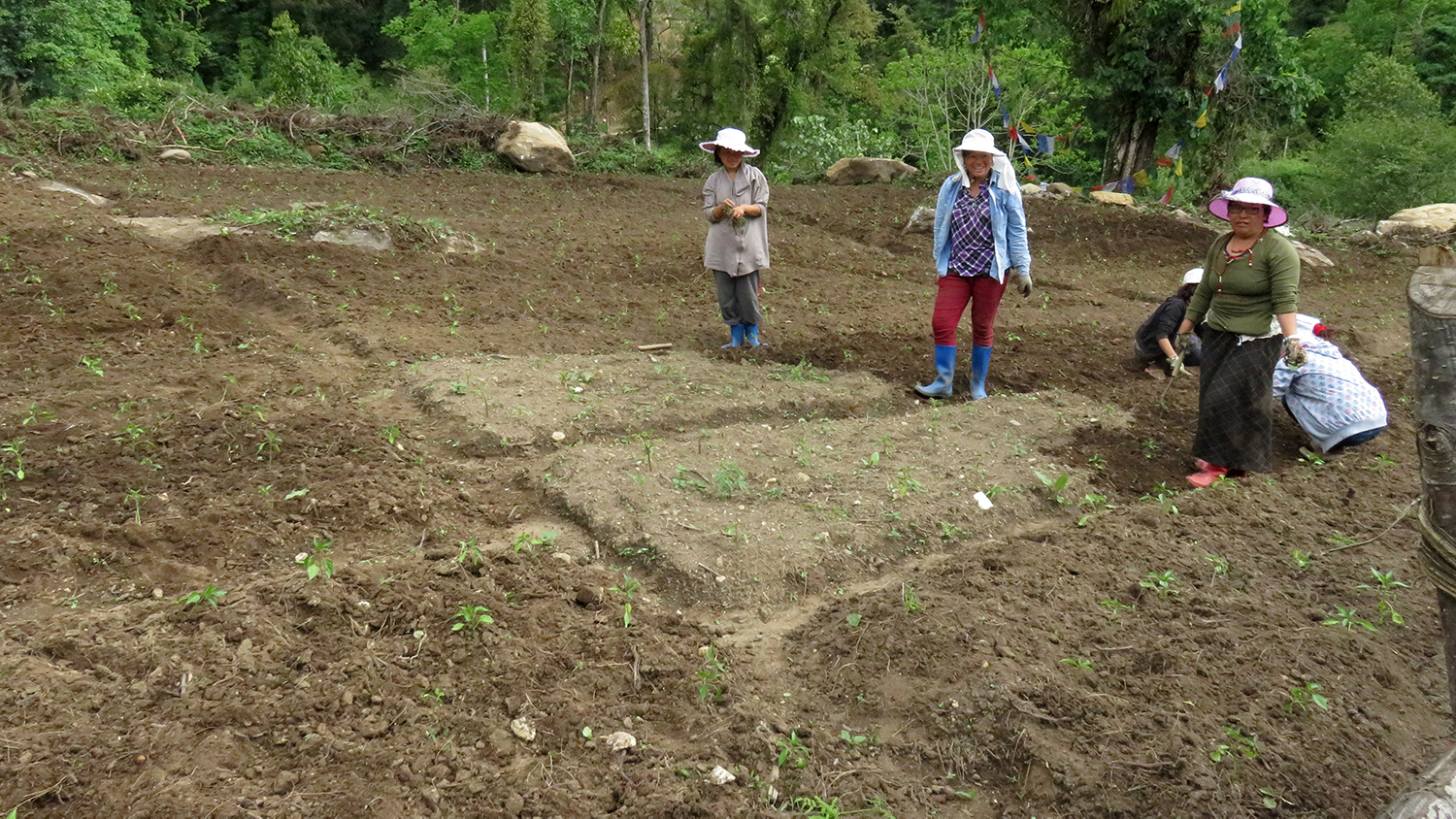 Women in Bhutan continue to play a major role in agricultural development along the value chain starting from production at farm through the post-harvest management and processing to the market or consumers. According to the Labor Force Survey, 2015, 58% of the population are employed in agriculture and of these women represents 30.5%. Further, women especially in rural areas multi-task along the value chains from the field to market, in their own enterprises, in family activities and as employees. The Comprehensive Gender Study, 2015 by AMJ Research and Consultancy found out that, in six Eastern Dzongkhags, 65.2% of women are engaged in ‘on-farm activities’ while the men’s engagement represents only 34.8%. The post-harvest processing activities of the farm produce are done by 73.5% of women compared to 26.5% of men. The percentage of women and men as members of vegetable groups is 63% and 37% respectively.

Mostly women lead the marketing of agriculture produce contributing to household income and the value chain development as a whole. Women farmers are one of the main actors in the vegetable value chains though much of their time is taken up for the home-based non-farm activities like care economy.

CARLEP is formulated based on the gender differences analysis and look to ensure men and women alike equally participate. The development of Gender Mainstreaming and Social Inclusion Strategy is one such measure under CARLEP that interprets the need of women’s inclusion and it aims to realize the women to at least comprise 50% of the participants in all programme activities. In the first year of the programme implementation (FY 2016-17) 5,550 women in the east were supported in the vegetable productions; 4,518 of them were supported with vegetable seeds, 869 trained on vegetable productions and another 163 women received other inputs for the vegetable production. Additionally, the programme also supported 256 women with potato seeds.

Opportunities for further support to women by IFAD

The emergence of gender-friendly farm machineries like mini-power tillers and new applicable technologies under vegetable farming has only encouraged women to part take in activities which in the past were only meant for men. The usage of mini-power tillers in land preparation and management by women is one such prominent features that underpins the notion. In order to further cement the involvement of women in the agricultural development IFAD and other women agencies should focus on promoting farm mechanization with the introduction of new and improved workload minimizing technologies.

The programme supports through three major components, viz. production intensification, marketing and institutional strengthening. Women have been through all levels pro-actively involved although their level of influence is minimal. In order to enhance women capacity under value chain operation, they should be involved in all stages of the value chain (AMJ Business Research and Consultancy , 2014). Any seed sowing, be it for the kitchen garden or for the commercial farm, it is mostly the women who do it. The weeding and transplanting of the vegetables are mostly taken care by women. IFAD programme has been funding the trainings of vegetable production and handling techniques and should also weigh options to train the farmers comprising of only women to avoid being suppressed by their male counterparts enabling them to voice out issues from women’s perspective when it comes to production and value chain as a whole.

Vegetable harvesting is usually seen as a non-tedious that should be taken care by women. By the virtue of 65.2% of women in the East are engaged in on-farm activities, the majority of works related to harvesting, thinning and managing the vegetables fall on women. Regarding the packaging and transporting of the perishable vegetables that need to get to the market within a short period, the women are helped by men especially when coming to the transportation.  The Comprehensive Gender Study conducted by AMJ Business Research and Consultancy, 2014, found out that the percentage of women working on post-harvest processing activities is 73.5%, whereas the percentage of men working on post-harvest processing activities is only 26.5%.In general, especially back in the villages, women are often considered to the prime group to do the value addition of the products like drying, pickling, chip processing, packaging and storing. With necessary support in small post-harvest equipment, their engagement in the value chain can only escalate.

“In agriculture, most of the light works after plowing is done by a female as they do not go out to do paid works.” (Male FGD, Kanglung, 2013). Marketing of the vegetable is also seen as a light work, which is most of the time done by the women. Both the decisions and keeping the money from the sale of vegetables are dealt by the women. “Women have more access to and control over all the vegetables relating to making the decision to sell, fixing prices and keeping the money.” (AMJ Business Research and Consultancy , 2014). The establishment of contiguous collection centers or sheds and sale-counters can be one of many pulling factors encouraging more participation form women in vegetable value chain. The institution of farm shops is also seen as an opportunity for easing the women’s marketing job.

Participation in vegetable groups and availing of agriculture services

The assessment conducted by RAMCO on the registered Farmers’ Groups and Cooperatives in 2016 found out that Eastern Dzongkhags alone has a total of 151 Farmer Groups, of which, 65 are the agriculture Groups. Similarly, the comprehensive Gender study conducted by AMJ Business Research and Consultancy has reported that the percentage of women and men in the vegetable group is 63% and 37% respectively. The same study has also reported that the ‘women’ are the main person from the households who attend the agriculture demonstrations and avail most of the agriculture extension services.

Thus, in apparent, it is women farmers who acquire more knowledge, skills and the information on vegetables including the demand trends in the market, thereby, standing as one of the major actors in the vegetable value chains.

Despite holding a very important contribution towards the vegetable value chains by the women farmers, they are still bounded with the string of challenges and often burdened by the households; the works which are not paid. They perform various home-based activities related to care economy, community roles and for growing food for home consumption. “It is been observed that most of the training is attended by the female as male go out for the paid works, however, credit is mostly handled by male though agricultural work is done by female more.” (Yangnyer RNR, 2013).

Women farmers plays an active and vital role in the vegetable value chains; of reaching the products to the end consumers. To further facilitate their roles, the farmers still need to be educated, trained, advocated especially to be in the influential and decision making positions. The gender-friendly farm machinery, post-harvest equipment, better storage facilities and other new and improved techs still need to be explored and promoted in the interest of the women farmers.