Study visit for the URCs Youth of Lhuentse to Eastern Dzongkhags 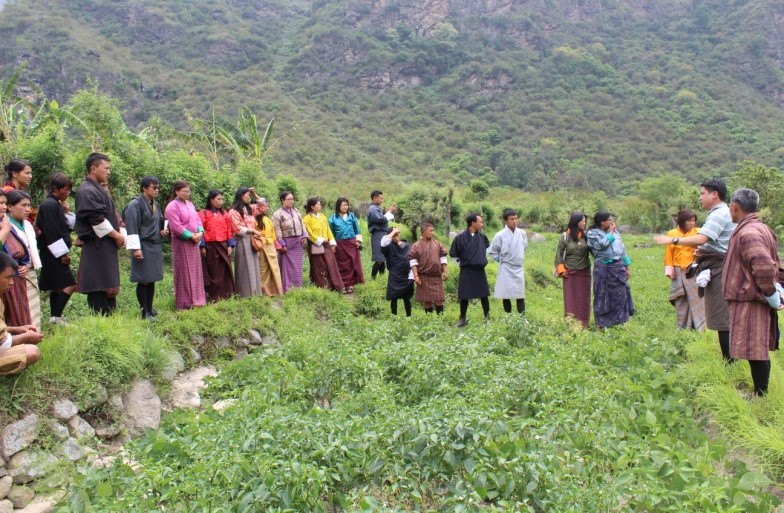 Lhuentse Dzongkhag has a total of four URCs (User Right Certificates) under the URS (User Right System) of Royal command of His Majesty – The King. The Gulibee, Tonglibee and Jagorbee URC was instituted in 2017 and Kurtoed URC was instituted in 2018. The early school leaver youth are the prime users of these four URC sites. A total of 45 acres of land which is initially left fellow are now converted into an arable land for commercial vegetable production.

However, these group of youth are premature into farming. Many of them do not possess an adequate knowledge and skills, and their exposures to different production technologies which actually would aid in the successful enhancement of the productions and the group as a whole is low.

Therefore, the Dzongkhag Agriculture Office initiated an 8-day long study visit from 24-30th April, 2018 to the other parts of Eastern Dzongkhags as a part of ‘Farmers Exchange’ activity under CARLEP. The study visit was aimed to broaden the intellectual knowledge of youth on agro-based enterprises, see and learn from research centers and progressive farms, and to widen up the innovative ideas on different production methods, value additions and marketing practices.

The group also visited to various progressive farms such as Norjinthang and Pam Dairy farm, Buna farm and mushroom span production unit at Khangma in Trashigang. The owners of the progressive farms and the youth interacted and discussed on various issues pertaining to organic farming, marketing mechanisms, challenges and opportunities. Finally, the study visit was ended with the visit to Samdrup Jongkhar Initiative (SJI), Organic group and lead farmer of Deothang.

With all of these capacities development and facilitation facilities supported, the youth are expected to perform professionally better in promoting the commercialization of agricultural production in the region.

Public Clarification in Response to The Article Published in TheBhutanese under the Headline “Lapses and Poor Implementation of Nu.2 Billion Agriculture Program for 6 Dzongkhags”