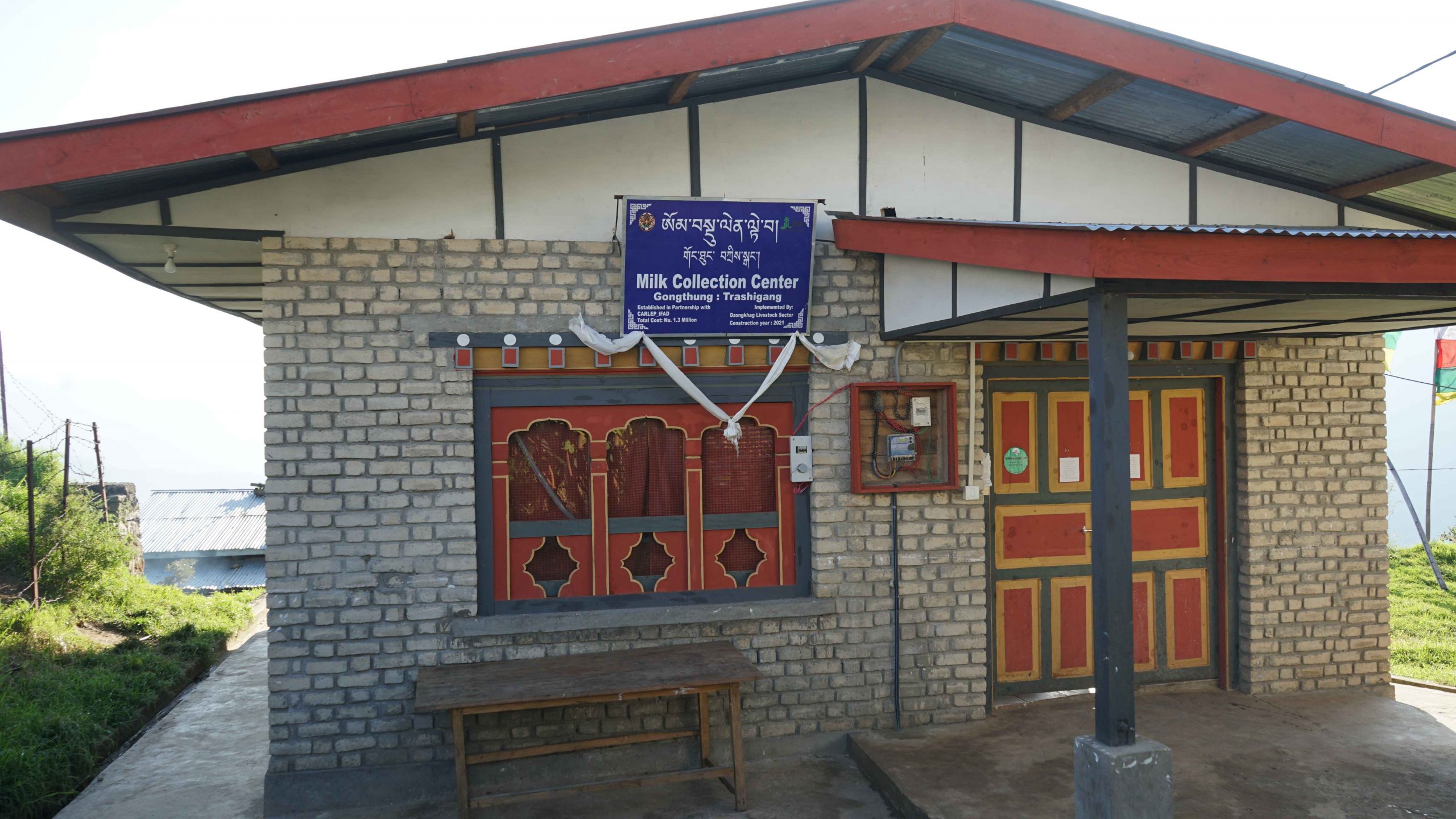 Gongthung Dairy Group which is currently known as Druk Chigthuen Namlay Tshodey was established in 2009 with 25 dairy farmers in Yangneer Gewog with financial support from Market Access & Growth Intensification Project (MAGIP-IFAD) and technical assistance from Dzongkhag Livestock Sector, Trashigang. Initially, each group member raised 1 to 3 improved cattle (crossbred Holstein Friesian and Jersey) in a stall- feeding system and produced an average of 40-60 liters of milk. In the past, group members took their milk to the milk processing unit and then processed it into butter and cheese. The dairy products were sold at the local market and Trashigang town. This laborious processing of milk and selling of dairy products lasted for almost 6 years until Koufuko International Limited (KIL) in Chenary started its full operation in 2015. Today, Gongthung dairy farmers are market-linked to KIL to supply fresh milk.

KIL has emerged into a long-term marketing channel for the dairy sector, benefiting not just Trashigang but also the neighboring Dzongkhags. A growing number of dairy farmers in Gongthung are joining the dairy cooperative as a result of the plant’s sustainability and economic potential. With an assured market for fresh milk provided by the KIL, the group’s membership increased from 25 in 2009 to 33 in 2020. The group was formally upgraded to dairy cooperatives by Regional Agriculture Marketing and Cooperative Office (RAMCO). Dairy group membership currently stands at 68 after the 37 new members who joined the cooperative in 2021. The quantity of milk produced also dramatically increased along with the increase in members from 130.8 MT in FY2020-2021 to 162.9 in FY2021-2022, showing a significant increase in milk production by 24.54%.

CARLEP’s Support in Strengthening the Dairy Value Chain in Gongthung.

Albeit the group has been functioning well with higher milk production prior to the project’s intervention, the group were challenged with space congestion in old MCC that was established in private lease land. Therefore, the Dzongkhag Livestock sector with the assistance from gewog administration leased government land for the construction of the new MCC at Gongthung. With fund support from CARLEP, the new MCC worth of Nu. 1.5M has been constructed with a standard structural design guideline of RLDC Khangma in collaboration with the Dzongkhag Livestock Sector.

The new MCC has not only helps the dairy groups to address drudgery reduction while transferring milk but also helps in maintaining proper hygiene and sanitation. With the incorporation of larger space in MCC, it has enabled the group to work efficiently and perform better. As a result, there has been increase in the supply of more milk from the dairy farmers to KIL for processing huge volume of dairy products, therewith increasing dairy products self-sufficiency and reducing imports within the country. Moreover, it has helped increase return to smallholder dairy farmers.

Besides infrastructure support, the dairy farmers in the gewog are being supported with milk chillers, deep freezers, milk cans, a butter churner, chaff cutter and fodder development in the area with fund support from CARLEP-IFAD. A total of 88.3 acres of land were brought under fodder development such as subtropical improved pasture, Winter fodder, Napier & Pakchung in FY2020-2021 and 1.7 acres in FY 2021-2022 in Yangneer gewog. With the assured market with KIL, dairy value chain in the Yangneer Gewog has been strengthened as number of improved cattle with the improved cattle shed has been increased, as well improved pasture has been developed. Currently, 70% of the cattle in dairy group are milking.  Today, each member rears at least 3 to 10 milking cows due to cattle purchase and sourcing subsidy from CARLEP.

The construction of milk collection sheds at strategic locations as well as MCS equipped with cold storage facilities has enabled the farmers to supply their milk to the nearest Milk collection Centre. Likewise, availability of Community Artificial Insemination Technician (CAIT) in the group has not only provided timely services but also achieved high success of progenies through AI.

On a daily basis, the group produces around 650-700L of milk per day both in summer and winter. The group sells the milk at Nu.36/L daily to KIL. On average, the group generated an annual net income of Nu. 5.9 million, from the sale of milk in financial year 2021-2022.

Of the total income earned in a month, only Nu.6,800 is deposited, each member depositing Nu.100 every month in the joint saving and the rest is divided among the members based on the quantity sold by each member. The highest milk supplier in the cooperative draws a monthly income of Nu. 30000-35000 while the lowest supplier makes the monthly income of Nu. 2500-3000. To date, the group has a savings of more than Nu.300,000.

With the group savings and good returns from the fresh milk, the group has employed 2 youth for measuring, testing the milk quality and maintaining the records in two MCS. Likewise, an annual event locally called as Noryang a ritual to flourish cattle wealth and improve the welfare of the dairy farmers is also conducted from the common group fund.

Today, the Druk ChigthuenNamlay Tshodey, Gongthung is one of the successful dairy cooperatives in Trashigang Dzongkhag supplying a huge volume of milk daily to the  KIL.