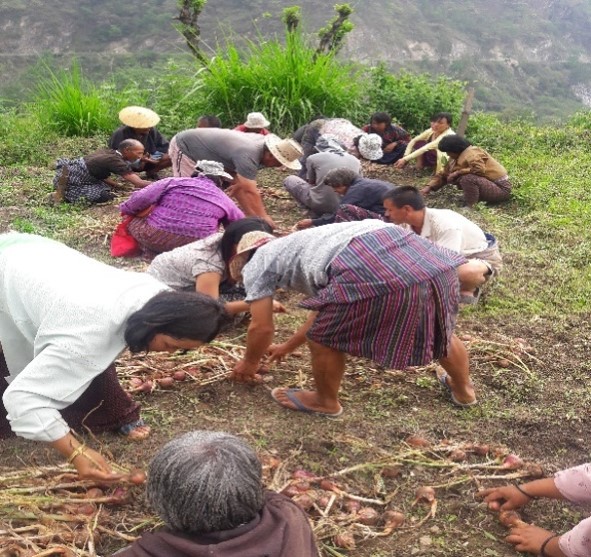 Bulb onion is one of the commonly imported vegetables in Bhutan despite its huge production potentials in the country. In order to minimize the import and enhance local production, the Agriculture Research and Development center (ARDC) Wengkhar initiated promotion of bulb onion cultivation following rice harvest. The program was first started in 2009. Since then, the number of farmers involved in bulb onion production has been increasing as they can generate good income. Farmers sell their produce at Nu. 50-60 per kg and earn net returns of Nu. 60,000 – 126,450 from an acre of cultivation. Thus, bulb onion production has huge potential for commercialization.

Although, Saling Geog has initiated the promotion of bulb onion since 2009, during the current season the Geog Extension expanded the cultivation to 10 acres covering 6 villages. One of these sites is in Jangdung village with total area, of one acre, under cultivation. With the onset of harvest season and considering the scale of production, it would not be possible for the farmers to sell their produce immediately. Hence, post harvest management is very crucial to minimize losses. There were many instances of crop being lost after harvest due to limited knowledge on post harvest operation.

In order to improve their post harvest practices, Geog Agriculture Extension of Saling in collaboration with Integrated Fruit Processing Plant (IFPP) Lingmethang conducted two days hands on training from 25th May 2017. The training was focused mainly teaching the farmers on bulb curing, drying and storage. In the absence of any separate curing shed or storage, the farmers of Jangdung village are using the available space of their house, preferably attic or upper storey, for onion curing. This space is traditionally used for drying maize.

There were total of 26 participants (11 men and 15 women). The training was funded by CARLEP-IFAD support to Dzongkhag and Geog. Similar training was conducted at Kalapang village under Saling Geog last year.