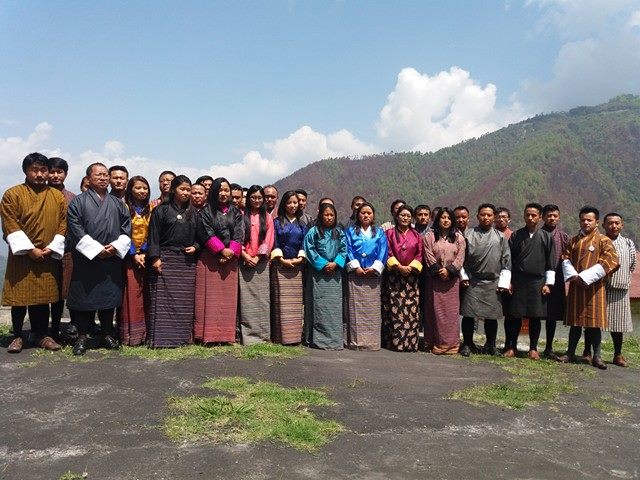 Following the development of a manual on the ‘Staggered Vegetable Production’ by Horticulture Sector of the Agriculture Research and Development Centre (ARDC), Wengkhar under the CARLEP’s funding, a two day training for the 30 selected Geog Agriculture Extension Officers (GAEOs) of the six eastern Dzongkhags has started.

The training is being facilitated by Mr. Loday Phunstsho, the Deputy Chief Research Officer of ARDC Wengkhar.

In general, solanaceous (chilli, eggplant, tomatoes) and the cucurbits (pumpkin, summer squash etc.) are the summer vegetables. The crucifers (broccoli, cabbage, cauliflower, mustard greens), roots (carrot, radish), legumes (common beans, peas) and the bulbs (garlic, onion etc.) are winter crops. However, the classification depends upon the varieties. While the day neutral crops like common beans, cucurbits, eggplants and tomatoes are the most ideal crops, it all depends on the day length (photoperiod) and the temperature.

Apart from various presentations on the staggered vegetable production and the role of climate and geography in agriculture, the participants will also have the ‘Practical exercises on use of GIS in identification of areas for vegetables cultivation. By the end of the training, each participant will produce the post-training work plan.

In line with the staggered vegetable production training, the Program Directors (PD) of ARDC and CARLEP emphasised on the need to develop the ‘Writing Culture’ among the field staff on what they are doing in the field, to increase both efficiency and the visibility of the works. PD, CARLEP said that the programme looks forward for the outcome and the impact oriented reports, especially for the CARLEP funded activities.