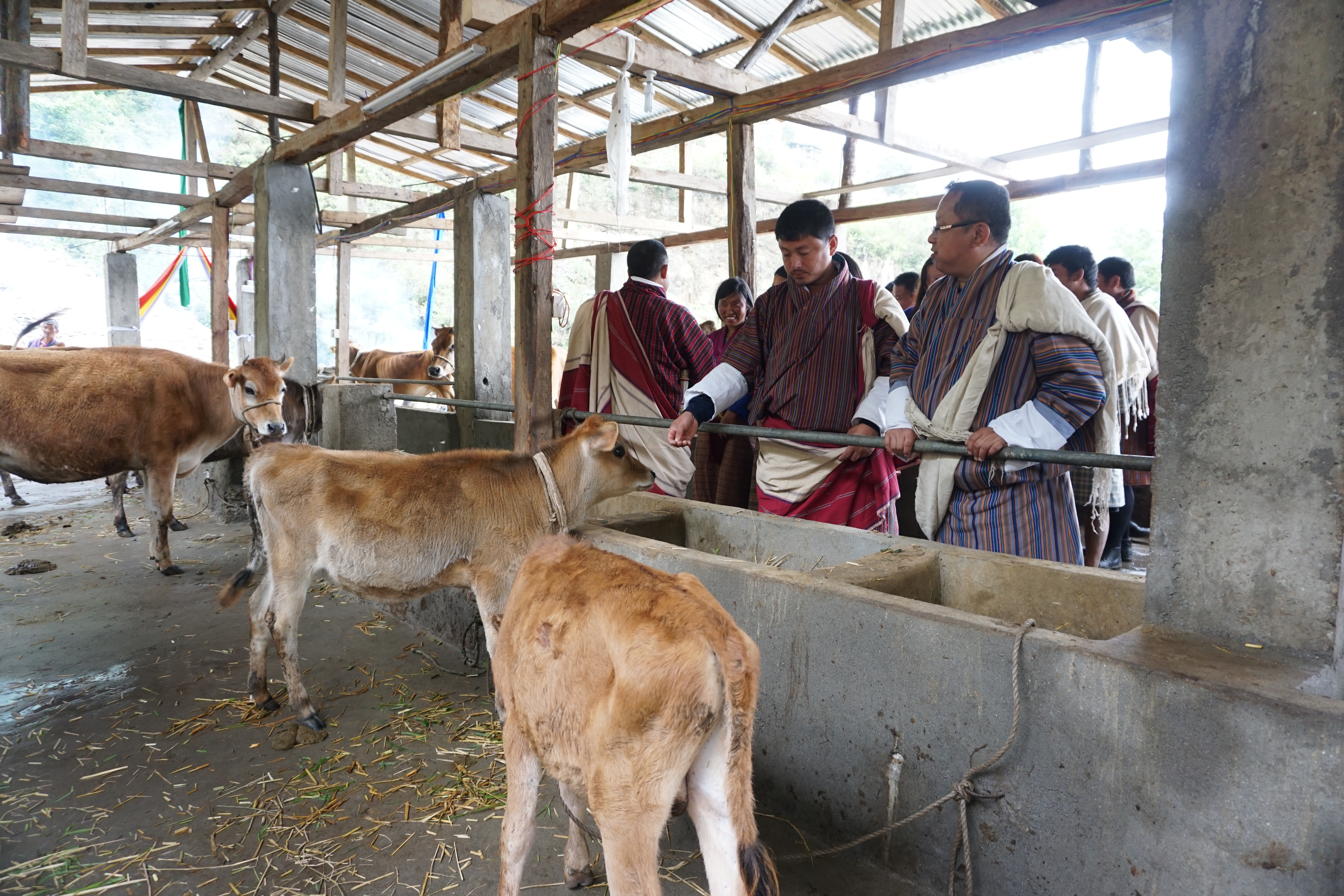 Youth unemployment in Bhutan is one of the trending national issues, which apparently aroused from limited employment opportunities and mismatch of the job skills and the individual competencies. Many prefer the job requiring less physical and manual works, which puts the works in the agricultural sector as the least preferred.

However, with the infusion of various input supports from the Government and other related agencies to makes the agricultural farming attractive, now youth are gradually finding their pace in the commercialization of both vegetable and dairy farms.

Setting the example of a successful youth group in dairy farming is the six youth (3 male, 3 female) of the Nazhoen Gonor Yarphel Tshogpa – a commercial dairy farm at Jamkhar village in Trahiyangtse Dzongkhag.

The six youth remained at the village for few years after they dropped out from the school and couldn’t qualify for higher studies from tenth grade. Their parents couldn’t afford to send them to the school either. For the first few years, this youth just remained home helping their parents.

However, with the continuous support, encouragement, and motivation from their parents and the neighbors to start a commercial dairy farm, the youth eventually formed a group on 21st May 2017.

The idea was then discussed with the gewog administration who have forwarded the matter to the Dzongkhag Livestock Sector. Following, officials from the Dzongkhag Livestock Sector had conducted a thorough research and necessary evaluations of the proposal with the feasibility studies. The members were also provided assistance to avail the loan from REDCL (Rural Enterprise Development Cooperation Limited). Each of them availed a loan of Nu. 1, 00000/- as the seed money.

Following the assistance provided by the Dzongkhag Livestock sector and the gewog administration in availing the loan from REDCL and drafting the bylaws and agreements of the group, the land clearing in the 7 acres of leased land was carried out.  The exaction works for the construction of the dairy sheds was supported by the Dzongkhag Agriculture Office and the Gewog Administration.

The fuel charge for the excitation and clearing of the sites and the materials for the construction of the dairy sheds was supported from CARLEP. In total, CARLEP has provided the funding support to purchase 108 numbers of CGI sheets, 108 bags of cement, iron rods, a deep freeze, 1 display refrigerator, 8 number of milking cans, 3 numbers of cool box and a chaff cutter.

A fodder development with 40,000 Napier slips, Ruzi and Pukchung and another 20,000 number of ficus seedlings were grown with the labor contribution from the neighbors and nearby villagers.

Exactly after nine months of establishing the group, 12 numbers of HF cow were sourced from Pemagatshel Dzongkhag at the total cost of Nu. 12, 00,000/-, wherein, 30% of the total cost was borne from CARLEP.

Paying off the hard works:

Not so long after housing the cattle, the youth started harnessing the dairy products. As of May 2017, the milk production from their six milking cattle was 1080 liters in a month. This quantity of milk produces about 750 balls of cheese and 51 kilograms of butter, which is sold at Nu. 30/ball and Nu. 280/kg respectively. (The production data is tabulated in Table 1). In addition, the group also collects cheese and butter from the villager and helps them to market. The village has 24 households and of this, 15 households sell their products to the group as of now (16th May 2018). The youth group buy cheese at Nu. 20/ball and butter at Nu. 240/kgs from the villagers and sells at Nu. 30/ball and Nu.280/kg in the market. This earns them approximately about Nu.9900 (Table 1). Overall, the total income of the group in a month is Nu. 46,680/-.

Societal impacts of the group:

One of the many features making this youth group ideal is its societal implications. The formation of the group has not only cast the light upon the group members themselves but also to the entire village of Jamkhar.

Firstly, the seven acres of land which initially was left barren by the private owners was leased by this youth group and converted into arable land. Similarly, the formation of the youth group has provided an assured market for the dairy products. The villagers who in the past had difficulty in marketing the dairy products and have been limiting only to the subsistence production can now expand their production capacities. The youth group collects all the dairy products from the villagers and does the collective marketing in the Doksum and the Trashiyangtse town. The products are also sold to the random buyers based on their demand.

In addition, the group will also function as the source of breeding bulls and heifers in the days to come, which will be supplied to the villagers to curb down the unproductive cattle heads and reduce the costs incurred in outsourcing the improved cattle.

The group will also maintain the fodder germplasm and supply to the villagers to encourage the farmers to take up dairy farming on a commercial scale. The maintaining of germplasm for the fodder seeds and distributing to the farmers shall be taken as one of the additional or the secondary business by the group.

The formation of the youth group has not only provided the members themselves with the employment opportunities but it has also exposed them to various opportunities that are available in the agricultural sector. Such dynamic youth groups will contribute to the overall development of the country as well as engage them fruitfully in the community development. They have also potential to revive the community vitality as is the case in Jamkhar village where all the villagers fully support the groups and the groups act as a focal point for social cohesion. The success of such groups will be a source of inspirations for the other youth and will act as a center for any government developmental plans. Therefore, in the future, such youth enthusiasts should be provided the assistance that they require to explore their ideas and creativities. This will not only contribute in curbing down the national issues of unemployment but also contribute to the overall economic development of the country as a whole.