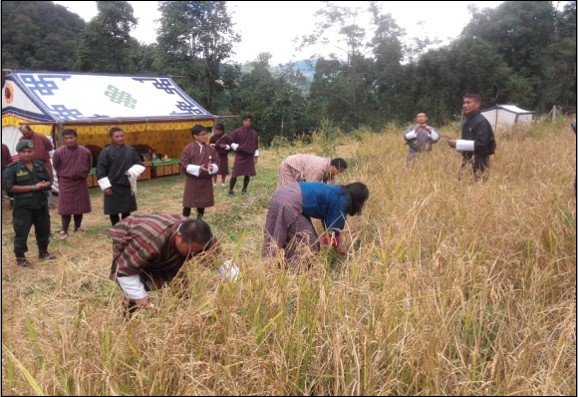 The first group of 16 educated youth in Menjey gewog of Lhuentse Dzongkhag who took up His Majesty’s Pilot Project, URS in March 8th, 2017 at Gulibi, had their first soybean and upland paddy harvest on 23rd October, 2017. The harvesting session was graced by the Director of DoA, Dasho Dzongda of Lhuentse Dzongkhags and other senior officials.

The youth has had the soybean cultivation done in 3 acres of land and another 0.65 acres for upland paddy from a total of 15 acres under farming. The farming was made possible with the inputs and technical support from various agencies like Dzongkhag Agriculture Office, Gewog Agriculture Extension, Agriculture Research and Development Center and other production supports managed with the fund of CARLEP-IFAD.

In order to promote and replicate the use of simple traditional farming tools, the paddy harvest was demonstrated with the use of sickle as a paddy cutter and stone paddy thrashing. Though the exact production data of soybean and the paddy isn’t known yet, it is estimated that the youth will harvest about 700 kgs of upland paddy this season.

The farming by a group of youth in Gulibi is a prominent example of a successful ‘Youth in agriculture.’ These group of enthusiastic young farmers is not just making livelihoods through farming but they are also helping their elderly parents back at home.